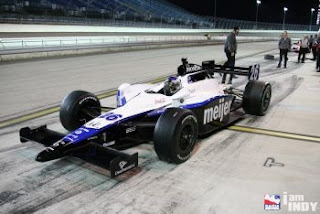 That sweet looking ride you see there is Marco Andretti's.

I for one am extremely happy in part because it looks dang sweet, but also because its not red, white and blue which seems to be the preferred color of most: Manning, Mutoh, Duno, Rice, and now Meira... Then add Wheldon, Dixon, Castroneves, Briscoe without the blue...and possible Roth as well, its a lot of red and white on the track and that not only is hard to distinguish but can be boring...

So yesterday was NEWS day, Champ Car and Indy car have merged but not all details are set yet... and it was also the first day/night of testing and what have we learned... well..

2. Helio and Julianne Hough are NOT an item... and Helio is tired of that question...

3. Panther racing has added National Guard as a sponsor, and although they are abandoning Yellow Black to give us yet another red white and blue car, I have to say its one sweet looking car.

4. All the CCWS transfers are being paired up with current IRL teams, that we knew, what we've now discovered are the pairings: "Forsythe with AGR, KV with Ganassi, Conquest with Vision, Walker with Penske, Minardi and Coyne with Panther, Newman/Haas with Rahal, and Pacific Coast with Foyt. Rocketsports wasn't assigned." -Curt Cavin's blog

Two things to note of it: I imagine all those teams are going to come over at some point... but secondly... no one was paired up with Dreyer and Reinbold...by chance or by choice?

5. Surfer's Paradise is meeting with Tony George sometime soon to setup their race for 2008. Some have stipulated this is a done deal and the meeting is just to sign the papers required.

6. Sarah Fisher Racing is official... but really nothing beyond the team existing and going to run at least Indy was official. I personally would rather see her in Dreyer & Reinbold's second car again at least for the full-time-ness of it.

7. And oh yeah... there was testing!! Click here or here for some good photos. What did we see from testing?? Well Dan Wheldon had the top speed and Milka Duno didn't have the worst, that was a spot taken by AJ Foyt's Darren Manning. Chip Ganassi and Penske took 1, 2, 3, 5 with Kanaan taking 4th spot...

Now from someone who wasn't just looking at the final results of the day after the fact, what was important to note here is that Milka's speed came at the end of that day, as you followed her times, they improved as the night went on, so it at least shows that she and her team are getting acquainted as well as learning to make improvements...and that is THE MOST IMPORTANT thing concerning Milka, as SAMAX and her never was able to do this last year, at least shes up to a decent running speed...

On the other hand Manning's best lap came early, 12th lap out of 85 he ran. The team seemed to have problems throughout testing with some handling issues, but this is what testing is for, so they can work these things out. The same can be said for Panther/Vitor Meira who I personally expected a little better from after all their off-season testing...

Danica apparently came down with the flu though Marco did a quick shake down of her car and still managed to best Milka and Manning's best laps...

Good news was seeing AJ Foyt IV in 6th position and consistently running laps in the high range all night in a sweet stealthy all black car (I hope thats the look for the season); for a driver who almost seemed a question mark for Vision until this week, thats a very impressive stance and a good way to tell them to never question him as a driver...

The biggest disappointment for me though was that Marty Roth never hit the track. NOTE: Jay Howard didn't hit the track because his rookie test got rained out and it still hasn't been completed. Marty however just never went out and a lot of us are curious as to why... everything up until now has looked good and part of the IRL gang type movements and setups, but why not even some initial testing runs, all his gang was there and all the parts...?

BUT NONE of this really means anything until we see what everyone does today in comparison... what did they learn, what changes are made, etc. so I'll report more on that tonight as things go... right now Indy Pro Series practice is closing up with Rafael Matos on top of the speed chart most of the session (got to wonder what he's thinking of unification as he could be in an IRL ride... though the AGR IPS ride isn't a bad place to be.. its just that AGR's pension for graduating its IPS drivers doesn't always look so great...)

UPDATE: One thing to note about the testing is that Tony Kanaan's car sported Frank's Energy Drink on the engine cowling while Marco's sported Coca-Cola just above the cockpit... both were thought to be sponsors in the making for IRL... is this a sign?