Congratulations, It's Not Red White and Blue!!! 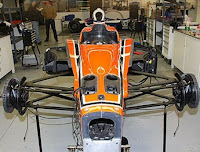 Ok so I caught the flu towards the end of our little road-trip and I've been out for a good while BUT I'm starting to finally recover today to a coherent level.

I should have the road-trip recap up tonight, but in the meantime the testing for IndyCar teams that are ex-Champ teams starts tomorrow, and I'm happy to see a couple things... 1 that the car count continues to go up (2-KV, 2-Conquest now including Enrique Bernoldi, 2-N/H/L, 1 HVM and a possible 2 from Coyne)... that looks like at least 26 cars on the grid next week at Homestead at minimum...

BUT more importantly; we now know that Aussie Vineyards is still going to sponsor Will Power and seeing the pictures in these two stories about Conquest is a victory for ALL race fans alike... WHY? Thats at least 2 if not 3 new cars to the series that won't be red and white, or red white and blue!!! I know what you're thinking, children dancing in the street, sailors bending over girls and laying on a smooch, cats and dogs putting the past behind them, its mass celebration in the world as we know it...
Posted by Allen Wedge at 10:34 AM