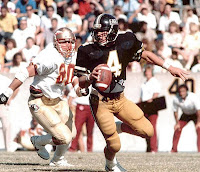 Obviously the big news for today will be that Brett Favre has finally decided he is going to retire. I don't think there is a person alive who can do anything but applaud Favre on his career and also for making this choice now as he says he is "mentally tired." That makes perfect sense, obviously he can continue to play if he wanted but there is nothing left that he HAS to accomplish. Cheers to Brett Favre!

(p.s. that's Favre at Southern Miss... felt like giving some promo for the alma mater)

Aaron Rodgers has got to be happy, and talk about true development of a player for once from an NFL team, he has actually had time to learn from watching the game and being taught rather than being thrown in wildly as a quick "solution" to losing...

Indy News - Max Papis to drive for Rubicon - I got the following release from Jason Priestly and Jim Freudenberg:

Max Papis will pilot the Rubicon Race Teams first ever entry in the 2008 Indy 500. Max brings an experienced resume to the team that includes three wins, 2 poles and 11 podium finishes on the open wheel side and numerous sportcar wins and podiums as well. Max started his racing career in 1981 karting in Italy and his flamboyant personality has garnered him many great relationships over his racing career.

"Mad Max is a good friend and we are very pleased he has joined our team for this Inaguaral team effort", said Priestley. "His personality and experience make him a great addition to our team".

Max brings his relationship with Geico to the team as a partner for the month. "Relationships are what build our sport and Max understands and cultivates that as a driver" Freudenberg mentioned. "This team is off to a great start because Jason, Sam and I along with Max, have been able to bring our business relationships together to form a strong business to business and business to consumer group that understand how to work together to grow".

Its good to see this team really come together and with plenty time to spare, I definitely look forward to seeing Papis on the track and cross the fingers in hopes this could eventually develop into a full time team.

At IndyCar testing yesterday Kanaan put out the hihest time but with everyone seemingly testing a lot of different things the times were pretty spread, which shows in at least that already this morning all drivers have passed 110mph mark with only 2 not beyond 111mph. In fact as we speak Hideki Mutoh is your new speed leader at 113.539... don't imagine Kanaan will let that last for long.

The best thing I've seen so far in the times is the good showing from Roth Racing. While obviously Marty is learning the ropes of turning right, Jay Howard is putting up contender numbers here and there, and it makes you wonder if he'd be on the top of the charts if he had Mutoh's car...? Is this our rookie of the year battle right here??
Posted by Allen Wedge at 11:10 AM