Notes from the Race Weekend

So yes as we all know Danica finally got her first win in attempt number 50... pressure's on Vitor for sure now (who by the way has bee quite visibly animated and angry in the last two races now) So here are the rest of the notes from the weekend many may be forgetting. While many people want to claim she got lucky, or that it was only fuel mileage, I'm going to just point out one thing people seem to be forgetting. She still beat Ed Carpenter and Helio Castroneves (who admitted that he did not have the fuel to actually attempt racing Danica to the finish; but for those who may not be paying attention, Helio/Penske is definitely targeting the ever elusive season championship with that move).

You can't overlook the fact that all 3 pitted at the same time, yet Danica was the only one who had enough left in the tank to go full throttle at the end while Helio was obviously slow to make it to the finish (from Timing and Scoring, it looked like he scaled down for almost the last 10 laps, and his team even radioed to him to just let Danica go, again going for the points).

And there is no questioning that in racing that knowing how to get better mileage out of the car is a very important skill to have and one you can't attribute to "luck strategy", because saving fuel only works if one can save fuel... just ask Larry Curry how well it worked out for the #20 Vision car... Carpenter looked primed for the win, the ESPN booth guys were even gearing up for it, so was I, and then shock in coming to find he not only ran too hard, but ran so hard he had to pit before the rest of the field who had 5 more laps on their tanks than him. Congrats to Danica, it was a great win!

Of the things unfortunately forgotten in the race was the beautiful start , its a real shame Marco spun on the cold tires trying quick passing (in what we can only imagine was a lesson from Sensei Kanaan) But I think Barnhart may have gotten into everyone's heads after the Homestead start fiascoes, because that first start was perfectly lines rows of 2 all heading into the green flag. Hopefully once the other 9 (plus Sheckter) re-join in Kansas this can continue.

While I love the guy, and I root for him constantly, I'm starting to wonder should Marty Roth retire to the owner/strategist booth? I know its too soon to judge a guy on what is essentially his first season but this has more not to do with Marty than it has to do with him. He's a little late in the career to be learning road courses, and I'm sure he racked up quite the bill in St. Pete for that.

However what this has more to do with is the fact that someone NEEDS to pick up Roger Yasukawa. While the average observer may not have thought anything of Roger's run it was absolutely amazing. They had basically no time to set up that car outside of barly an hour of practice 2 days earlier for the first time ever the car hit the track. While he started the race off the pace, just by the time his brakes gave out they had that car holding its own, and thats just something you don't do unless you have a great driver. Then lets add this to the fact that last May he jumped into what was essentially Sarah Fisher's backup car and immediately got more out of the car than Sarah had.

There is just no questioning someone needs to get this guy in a car full-time, and beyond that someone needs to get funding to turn Greg Beck into a 2-car Yasukawa/Alex Barron team. I honestly believe if you had those 2 drivers and that team fully funded they would immediatly be contenders...

Also, had he not been screwed by the fact that he pitted before the yellow flag came out, theres a very large chance Townsend Bell may have won that race... boy I can't even imagine what a mess that dual driver situation would become had he done it... Also, in the same situation Hunter-Reay was in a pretty good line until he also pitted during green just before that final yellow.

Lastly, how awesome was it to see the bloodlines finally show through AJ. Foyt IV?

In the meantime no less than 24 hours after Danica won Swiss female Simona De Silvestro won the Atlantics race... though if you go by local time I think it technically happened before... The more important thing to note of this is that there should be no notes, none of the racers these days seem to think of anyone on the track differently, just simply as drivers, and thats the way it should be.

And while everyone was busy trying to bring back 2005s Danica Mania, Will Power won Long Beach in a pretty dominating fashion, though not many watching on ESPN would have known as the coverage was blah at best with the final 10 minutes dedicated to someone who wasn't even in the race being broadcast. (more on this later) 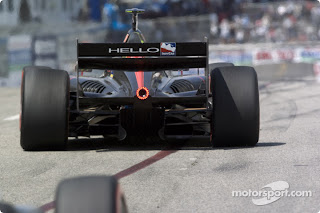 and for those who may not have seen it, I'm easily giving the favorite paint job award to HVM and Ernesto J. Viso for the rear wings awesome 'Goodbye ChampCar' on the front and 'Hello Indycar' on the back.

Lastly, I'm not going to do this every week but Eddie Cheever can't get to ESPN's booth soon enough. I really believe he will knock some reality back into the booth and honestly will spark good conversation between Goodyear who is obviously being brought down with only Marty to bounce off of.

The current ESPN/ABC team has gotten too comfortable with themselves as EXPERTS and we're about to add on top of that, resurrected Danica Mania. They weren't entirely horrible at Motegi or Long Beach but there are still some pretty sore spots while the IMS radio broadcasts are running laps around them. Basicly the are falling victim to NFL broadcaster's disease in which they think the people watching can fill in all the blanks themselves and not doing much actual play by play or analysis. There was no coverage or replay of Marty or Vitor's crashes (which involved another car), too much Danica in Long Beach, too much personal opinion on what the IRL should take from Champ Car, and still not enough coverage of the field. I think Arute may have been low on sleep by the end because "When are you going to win again?" was possibly up there with the worst timing post-race questions in history along with the billions of psychologists that the pit reporters have become after the race with the "how do you feel?"

It was however very nice to see them gearing up coverage on Carpenter when they did the math in their heads and realized while in 5th he was in line to win... and then also very nice to see them genuinely excited when Helio went to saving mode and couldn't defend against Danica. They're getting better as we get into the season but I think Cheever will give them the kick the broadcast team really needs.

All in all, a great week of racing, and with Schekter testing already tomorrow, this weekend at Kansas is looking like its going to be a giant ball of excitement...
Posted by Allen Wedge at 11:08 AM

Too much Danica at the end of Long Beach race is right on. There was some extremely good racing being televised for 4th through 6th position. They were all nose to tail and nary a word about it.