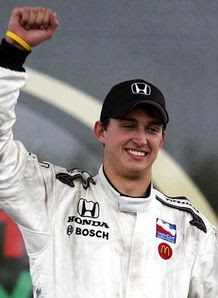 As you may have already gotten the news, Graham Rahal has become the youngest winner ever in the IndyCar Series at the ripe ole age of 19 years 93 days and also only the 4th person to win their very first race. Awesome!.... simply awesome really. As there are many great in depth summaries around, here are some quick notes:

-Races (or only road course ones) must finish on time, no matter what, because it was terribly important that we start SportsCenter's clip highlight show on time...

-In case you hadn't known, apparently Marty Reid thinks Danica is the smartest driver on the track... I'm not saying she's dumb or anything, but that is quite the compliment to a driver who time after time gets killed on starts/restarts, spins, and has horrible in-out laps in general.

-There is no Big 3 on road courses! There were 8 different leaders on Sunday.... 2 were from Big 3 teams. We already knew Hornish and Wheldon weren't exactly polished on the roads, but with Briscoe coming in it looked like we were set for more big 3 fun. Instead we were treated to a race that if run under the full length, most probably would have been won by none other than Ernesto J Viso.

Viso was great to watch, actually so were Vitor Meira and Darren Manning all 3 of whom made minced meat of the field by going to slick tires before everyone else. Vitor unfortunately got taken out by an overly aggressive mistake by Frank Perara (the move wasn't terrible, but should have been avoided). He was then fully taken out by a un-cautious Townsend Bell, which just strikes more to the truth of what Dr. Olvey speaks in Rapid Response...

-Speaking of Briscoe above he did log some leader laps looking solid before making a mistake and then blaming the car in front of him for...umm..being in front of him?...umm...making him actually race for position...? I mean, I know its normal to just assume a Roth Racing car is a lap down, but I think soon drivers will start to realize its not Marty in that car.

-It was a great race to watch and the rain made for a great spectacle in watching 26 different strategies play out, but the 2 biggest notes of the night were simply that like I said, the Big 3 don't have a monopoly on road courses anymore, and secondly... that ESPN's coverage absolutely sucks.

I could go on about Reid praising Danica for no reason, or both announcers missing multiple passes, and at least twice missing passes for the lead happening right on the television (imagine John Madden just telling his favorite Brett Favre story in the middle of a team scoring a touchdown without Al Michaels interrupting him), I could talk about how absolutely poor Brienne Pedigo is as a reporter of any kind as she never seems to know who she is talking to, talking about, or what she is supposed to do (like not having a follow-up question for the race winner, or talking about how much Servia spent at the gift shop while standing in front of Kevin Kalkhoven who was waiting to be interviewed)... I could talk about how no one asked Bobby Rahal wtf happened to his car, or why he seemed to not care that his car went from 3rd to 17th....I could talk about how we literally watched the Coyne crew rolling Bruno's car away behind an interview with Dixon yet no one bothered to tell us why Bruno's car was being rolled away....I could talk about how ESPN STILL continues to miss re-starts while in side-by-side... I could talk about how absolutely AWESOME Davey Hamilton and Mike King are on the radio broadcast and how badly they not only put people to shame but how they control their pit reporters to go get information for them... but none of that would compare simply to the best moment in ESPN/ABC Indy Car broadcast history...

We are just past mid race (lap 47-50ish), with a lot of strong racing going on up front, yet the top 5 has shaken down to Ernesto J Viso, Enrique Bernoldi, Vitor Meira, Darren Manning & Jay Howard... ALL of them racing for the positions, and not just picking them up by being the last to pit (a la Kosuke).

All of the guys are racing each other extremely hard and Marty and Scott are stumbling bad to say anything... anything at all... anything coherent (how about showing or talking about Viso's GP2 crash/career, Bernoldi's F-1 time, Vitor's winless streak, Manning's career and resurgence back from Ganassi, the fact that he actually gets along with AJ or about Howard as the former Indy Lights champion or the recent good showing from the new Roth Racing)....

No... instead Marty busts out this gem:

"These are 5 guys we don't normally talk about"

And know you all know why I turn down the sound and listen to my beloved IMS Radio Network...

here I thought I was being too harsh in my criticism, and yet this reads like you read my mind and transcribed it.

Great job! Spot on with all the comments about the announcers. So many blunders, but the one that made me most uncomfortable was Brianne Pedigo talking and Kevin Kalkhoven just standing there waiting. That was absurd. I think the guy deserves a little better treatment than that! Also the whole Graham/Bobby and Tiger/Earl monologue from Marty Reid was just a bit much, besides just being completely out of place.

I still can't get over the 5 guys we don't talk about comment... and then continuing to not say anything or learn anything about them...

but yeah the talking in front of KK, who wanted to be nice and do an interview but obviously wanted to get back to his team, was bad and what she was talking about in front of him was beyond uninteresting, as was not having a follow-up question for Graham after the win... thank god someone from IMS radio pulled Graham away from Brienne before it was even more awkward.

But to be honest I found the lets not even ask Bobby about his own car angle just as bad as the '05 lets make every conversation about Danica coverage.

I understand people will think, "lets see you do any better" but I'm not hired to do better, these guys are, and when you listen to Davey and King its too stark a contrast to not make the switch.

p.s. thanks everyone for the reading and the comments...