Firstly, it looks like we'll be getting an announcement from Pacific Coast Motorsports tomorrow putting Mario Dominguez in a car for the remainder of the year starting with Indy... though he'll have missed 4 races that one 3rd place finish still could leave him an outside mathematical championship contender.

Secondly, if you read this thing to any extent you know I'm one who loves sweet looking IndyCar rides, especially ones that are just plain different from the rest that stand out and not the ho-hum red white blue stripes and logos... and I have to say that the Tomas Sheckter's new ride at Luzco Dragon Racing is up there on my list of sweet looking rides... 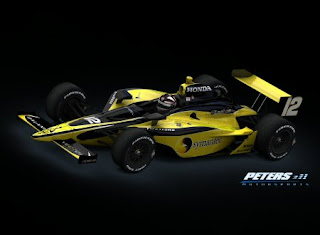 It might have some to do with my alma matter, but a sweet ride nonetheless...

Obviously since Danica's first win, the world has exploded into that of positive publicity and, while not as much, a good deal of negative publicity... basically from a bunch of sexist/prejudiced people who just can't seem to bring themselves to give Danica any credit, finding every excuse they can think of no matter how big or small... It takes a NASCAR vet to sum what are the facts the best...

Its pretty simple in racing, whoever goes the distance first, wins... there is no gray area. EVERY race is a fuel strategy race... the problem is most people don't pay attention to it and most drivers follow the leader's strategy so that no one notices... when everyone pits on a caution lap.. that's strategy my friends...

2008 Grand Prix of St. Petersburg - Just 2 weeks ago Graham Rahal used "strategy" to win knowing the race would end early so he strategized his fuel tank to just enough to finish...

1999 - U.S. 500/Michigan - Tony Kanaan gets his first victory but only because Max Papis runs out of fuel on the final lap

1997 Sonoma NASCAR - Montoya only wins because of fuel strategy, lets scratch that one from the record books...

2008 Phoenix NASCAR - Jimmy Johnson wins race, but only because of fuel strategy so this one doesn't count

1992 Indy 500 - Unser only won because horrible weather conditions took out 2/3rds of the field including the pole sitter so he really only beat 12 other cars and only 4 were on the lead lap.

1989 Indy 500 - Emerson Fittapaldi wins but only because he hit wheels with Al Unser Jr. and spun him out...

1997 Indy 500 - Arie Luyendyk wins the race but only because USAC decided to go green for last lap without telling anyone. (ok I only included this one for the priceless radio chatter on the last lap from Luyendyk... and wow those engines sound harsh...)

but maybe the most relative to this discussion...

2007 ICS Motegi - Just one year ago Tony Kanaan won Motegi but only because he did EXACTLY the same thing Danica did a year later because Wheldon was obviously the best car leading 126 laps and Kanaan used fuel strategy to get his definitely slower car to the finish line before Wheldon could catch him...


so I guess the conclusion we must come to is that all race car drivers suck, and none of them deserve any of their wins because they ONLY won them because of circumstance of things that happened during the races they are racing in.

and as I can only imagine... somewhere out there Kosuke Matsuura is "f'n disappointed" in you for thinking you can categorize race wins...
Posted by Allen Wedge at 12:32 PM