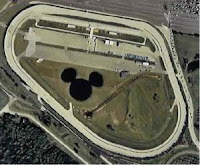 First, this isn't breaking news or even new; so don't copy my headline and run with it...

Recently some guys on TrackForum brought up how they missed Walt Disney World Speedway (The Mickyard). I then added to the conversation that I vaguely remembered some kind of announcement pre-merger about the possibility of the IndyCar Series returning to the track.

No one knew what the hell I was talking about, and I couldn't (and still can't) find anything remotely resembling an announcement about this in my 30 minutes of web searching, but I am certain this wasn't a dream...

I then remembered that I e-mailed Mrs. Wedge about it when the "announcement" happened, asking her if she'd want to head out to Orlando for a week if the race were to actually happen.

So I tracked down the e-mail to my wife (Dated December 05, 2007) in which I copied/pasted the release (which may or may not narrow down the results as I usually paste ESPN reports to her cause her work blocks it) .

I can't find a single bit of this release anywhere on the internet now but am offering a $20 reward to anyone who can shine some light on this for me and the rest of the world.

Obviously the whole thing could have gone away with the merger, or just gone away like Louisiana International Speedway which was announced (and then disappeared when they discovered the main partner was a fraud.)

Anyway here is the release I sent to my wife.. I promise I didn't make this up, mostly because who has time to make this kind of thing up....

"The addition of this race is only the tip of the iceberg in our new plans to reach out to the world of motor sport," said Crofton, "Near the current Wide World of Sports Complex, construction will begin soon on a new state of the art racing facility. We've realized the mistakes that we made when constructing the original speedway and will be looking to fix these in the new facility."

The new racing complex will reportedly feature a 2.5 mile road course, along with a new 3/4 mile oval. The level of quality in the facilities is rumored to be great enough to bring Formula One back into the United States. Crofton, however says that isn't in the plans.