Rookies ready, bring on the vets

So as day 2 of the Rookie Orientation Program is done along with some refresher for some time-off veterans (Hamilton, Papis, Junqieria) the times are looking promising so far.

Notes from the two days: 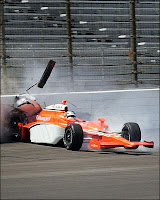 -Jamie Camara will be needing some ibproufen in the morning. On only his first few laps of the day the rear of the car got out from behind Camara and he slid very hard backing into the wall heavily damaging the rear and right front of the car. The bigger thing of note however is that he took some time to finally get out of his car on his own power and while all the x-rays came back negative, he was complaining of back pain and will be reevaluated in the morning before being given the go to head back out to the track.

-So obviously Camara should be fine in the long run, but isn't this a situation where Conquest Racing should be working on a backup plan, say like the scenario they themselves laid out in saying Frank Perarra would fill in if needed during the year, yet that can't happen if Perarra never passes through ROP. which bring up...

-WHY, oh WHY do teams who need the most work always wait till the last second... We ALL knew before Sunday that Mario Moraes and Mario Dominguez especially and any other new drivers would need as much time as possible to get acclimated to the track, and to get through their ROP 4 stages in the first two days. While there may be other outside team factors concerning Frank Perarra's non-running, Moraes got only 3 leak checking laps in the first day while Dominguez and Pacific Coast Motorsports, not only skipped the first day (trying to get the car through tech) but didn't really get out until a good hour or so had passed in today's session.

If you need to get acclimated to a new car and new track, take as much time as possible given to you, but remember it is limited.

- Indy 500 rookies, yes; rookies no. Though some of these guys are actual top level rookies (Viso, Perarra, Camara, Bernoldi, Moraes, Lloyd, Howard) it doesn't mean all these guys aren't good drivers as was evidenced by the speeds put up today. Keep in mind the 225,ph was the high mark for last year and that last years rookies struggled to hit the 220 mark. Today not only did we have 9 drivers over 220mph, Times that would qualify you on the first day/weekend for sure last year! we had Power and Lloyd actually having fun and one-upping each other at the end of the day.

One things for sure, if the weather holds up, this week should be very interesting and a lot of fun.
Posted by Allen Wedge at 4:26 PM

I know that the cars that PCM received are real junkers, in fact they didn't pass inspection the first day. LOL!

"Once we rolled through tech, three of the four wishbones on the car were deemed unusable by the series. These are suspension pieces that we received with our car and we were not aware these parts are no longer being used," said team owner, Tyler Tadevic. "The guys have been working hard, we're back to being rookies again. We disseminating tons of information trying to catch up and we'll make sure Mario gets through his orientation tomorrow."

I would imagine that DCR are in the same predicament parts wise.

Thanks for the info, I figured it would be something likewise for PCM, and honestly how did they receive so many outdated parts in the first place? any idea where they got their car(s)?

It's definitely the situation DCR has been in, in fact Bruno's been pretty pissed about it over the first 3 races, most obviously because his crappy equipment is holding him back.

Still don't see why Moraes was only getting on track with 5 minutes left in the first day, that kind needs as much track time as he can get, its a long month so we'll just have to wait and see.

No idea where they got them. I just know they got two used cars delivered to them prior to Long Beach. (it's my understanding that they don't get a new one because of their late entry)

I have no official idea why the DCR cars didn't go out on track on Sunday. My take? I know Mario is getting a lot of coaching. He is green GREEN GREEN as far as the rookies go. (sidebar: kudos to Dale Coyne for taking on the rookies and misfits and drivers that are past their expiry date and nurturing them and giving them their confidence)

I think they wanted to make sure he (Mario) was really prepared before taking the car out on track. (they have afterall completely rebuilt that car once already)

If I were to be honest, I will be surprised if Mario actually makes the field. (should there be a legitimate bump day) Not a knock against him, but I think a little more experience will go along way with him. Again, just my opinion.