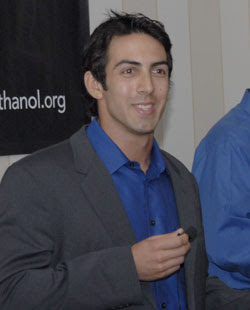 I'm a believer in second chances (especially to someone who wasn't terrible) but after seeing his recent run ins with Matos, I'm sure this may be one last shot at resurrecting any kind of impression he has with current IndyCar Series teams...

the good news is he does have a good relationship with A.J. as he used to drive for him, so thats a good start:

Simmons to drive the second A.J. Foyt Racing entry in the Indianapolis 500 as a teammate to Darren Manning, driver of the No. 14 ABC Supply Honda-powered Dallara. Simmons will get in the No. 41 ABC Supply car for the first time on Wednesday when the track re-opens for practice. "It's great to be back with A.J.'s team," said Simmons. "I'm looking forward to working with A.J. and Darren and the whole Foyt team. Darren can help me get up to speed quickly and hopefully I can contribute something to the team as we get ready for qualifying next weekend. "A.J. is taking it on himself to put me in this car so I just want to do the best job I can for his team." "I'm glad to be working with Jeff again," said Foyt. "I like the way he drives and the way he hustles the car pretty hard which is what I look for in young drivers." Simmons, 31, drove for Foyt in the Indy Pro Series in May, 2004 when he finished second in the Freedom 100 at Indianapolis Motor Speedway. It was that same month that Foyt gave Simmons an Indy car to do his rookie test at the Speedway which allowed him to compete in that year's Indy 500 driving for Mo Nunn. He finished 16th in his debut after starting 29th as a 2nd weekend qualifier. Simmons drove for Team Rahal in 2006 and 2007 before being replaced by Ryan Hunter-Reay in July. In 25 starts in the IndyCar Series he has posted 11 top-10 finishes and has led eight laps, including a lap in last years' Indy 500. His best finish is sixth, which came last year at Texas Motor Speedway where he led twice. Last year at Indy, he qualified 13th and finished 11th for his best finish to date in the 500. Rain on Sunday washed out Second Day Qualifying and practice at the Brickyard, setting up next Saturday as the day when teams will attempt to qualify for the remaining 22 positions, including Manning, whose qualifying attempt on Pole Day was aborted. Once the field is set next Saturday, the bumping will begin on Sunday as non-qualifiers will try to bump their way into the field by qualifying faster t

han the slowest car already in the field. The Indianapolis 500 will be broadcast live on ABC-TV starting with the pre-race show at 12 noon, Sunday May 25th. The race is set to start at 1 p.m.


And yes that KOOL car is in fact Jeff Simmons at Laguna Seca via the Lights series in 2000...

The good news overall is that we already have 37 entries for 33 spots (or 26 for the remaining 22 spots) including the Beck entry which has yet to name a driver, and here are the suspects remaining:

1 - American Dream (formerly Playa Del) says they will field a 2nd car but is TBA to date
2 - The big rumor that the #77 Penske entry may be a loan out car to Walker Racing/Paul Tracy
3 - Will Panther Racing actually attempt a 2nd car in now that Vitor's already in?
4 - If anyone else decides to turn a T-car into an entry.

As the next day of practice approaches this Wednesday expect official news to come for all of these.
Posted by Allen Wedge at 2:29 PM