Now THIS is Activation!

THIS IS EXACTLY what the IndyCar Series needs! This is why they

very much need Subway to be the new title sponsor:

"Expect to see IndyCar Series displays and maybe even a driver or two next year in some of the nation’s leading department stores, like Macy’s, thanks to Izod’s new line of IndyCar-branded apparel.

Izod unveiled a new line of vintage jeans and shirts with IndyCar prints last week at the Magic Marketplace in Las Vegas, which is regarded as the leading trade show in the fashion industry."

THE JUST AS EQUALLY IMPORTANT PART

"Driver Ryan Hunter-Reay will be prominent in Izod’s commercials, which were shot Aug. 23-24 at Infineon Raceway, and will run on broadcast and in cinema. Izod also will use IndyCar Series displays in stores to accent its new line of IndyCar-branded wear for men and women."

I'll be honest I owned maybe 1 or 2 items from IZOD already, but this:

"IndyCar and Indianapolis Motor Speedway released its nearly 100-year-old archive of images to Izod for use on its clothing. Those images, including the iconic winged wheel, became prints on the apparel." 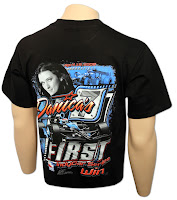 ...is not only the kind of notice and activation the series really needs; but also triply as important, the quality and tasteful apparel the fans so desperately want (instead of the tacky NASCAR/WWE-ish stuff we've got right now).

I agree that this activation is awesome. It's nice to see someone other than the Brats getting some exposure and promotion. It's also nice to see the ad coming out and running post season.

I hope this is just the first of many sponsorship activations we will see as we head into 2009.