So it's clear that with the award-banquet now done and most budgets not being set (at least publicly) that we're going to go back into the silent part of the off season with winter arriving and knocking out most practicing, though we will get 1 more A1GP race and the final NASCAR weekend for those interested before we really go officially silent for the winter as we all long await the awesome 24 Hours of Daytona.

So with that done and us officially taking Upside-down Indy car theories as far as we could on Trackforum and Mythbusters both without actually testing anything its time for more offseason fun.

Offseason Fun #2 is book club time. If you aren't a big reader, you're missing out simply on what great stories there are to be told, and if you simply haven't had the time or known what to start with lets make this the place to be to help you out as the Unofficial IndyCar Book Club. 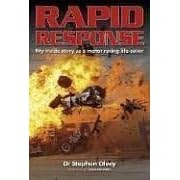 Last year I (like many) caught up with what I think is the most important book for any IndyCar racing fan to read: Rapid Response: My inside story as a motor racing life-saver by Dr. Stephen Olvey. Even for those not big into IndyCars or even racing in general the book is a must read just to learn how far we've come as humans from what we used to have as medical practices and prevention and how a lot of things go into practical use; as well as human learning from stupid error (like hiring a private ambulance service that has no rights to actually leave the track in case of emergency). In addition to this it has great stories just from a racing insider but overall gives you a great appreciation for the sport we all love. So if you haven't read that I'll put that one atop your list.

Me? I have 2 books to start my winter reading list this off-season and am going to 2 different spectrums of the IndyCar timeline...

Book 1 for me comes as per its great recomendation per Jeff at MyNameisIRL during last weeks Trackside with Cavin and Kevin, Tales from the Indy 500 by Jack Arute. and I've got the Revised & Updated version for full enjoyment of learning what "Jackie" has seen and heard from 1969 and forward.

Book 2 came as a complete surprise present from Mrs. Wedge. INDY: Racing Before the 500 By: D. Bruce Scott . Its a book you can't really find anywhere and as such is why I never knew about it, turns out she found out about it because one of her best friend's boss is the guy who put it together. I skimmed it quick to get a jist (because it is a rather HUGE book) and it is an amazing FULL comprehensive collection of pictures race results, stories from every event held at Indianapolis Motor Speedway up until the first Indy 500, meaning we have everything in here from motorcycles, to cars, to planes and balloon races!? 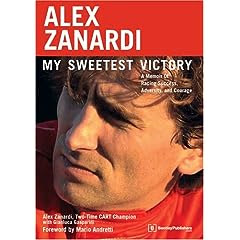 #3, should I get through these quickly, will be My Sweetest Victory, Alex Zanardi's book, and if you even need to ask why, you simply need watch these 2 videos: Part 1 / Part 2


So anyone else have books to recommend for IndyCar/Racing fans?
Posted by Allen Wedge at 4:37 PM

That's a good starting point. The Arute book is fun and easy to read, written like a bunch of notes. For full effect you have to imagine reading the last paragraph of every chapter in his typical "dramtic pause near whisper with flourish" Jack Arute voice.

Yeah it was a great book, I only wish there were more; near the end he lets some stories get a little more in depth, and I only wish they were all like that.

On book #2 right now, learning how Carl Fisher originally wanted a 5 mile track!? And how even when the available land cut him down he still tried for 3 miles but to make room for outer buildings they went to 2.5 And we're about to have our first balloon race/event.