--In quick news; as was rumored a while ago has now been confirmed in that Michael Andretti will be Danica's new race strategist. I find this to be interesting in that Michael is a more aggressive strategist while Danica seems more comfortable playing strategy; the absolute question for me is: what happens should she have a run-in with Marco on the track?

For better and fuller analysis of the move head on over to MyNameIsIRL or IndyRacingRevolution as Jeff and Chris have already put a good deal of thought into it.

--In Indy Lights & A1GP news Scott Dixon's fellow Kiwi, Johnny Reid, has tested for Team New Zealand's 'Black Beauty' and may be racing for them soon. This comes along with recent talk that Reid has no deal in place yet to be back in Indy Lights. With part of the late A1GP season overlapping the beginning of Indy Lights season, I have to wonder if maybe he'd really be trying both or if this is plan B.

--In a small bit of IndyLights news and IndyCar Series speculation for the ladies. Genoa, Panther, Guthrie-Meyer and Sam Schmidt Racing have been testing at Palm Beach raceway, getting acclimated with their new drivers. While there isn't a terrible amount to report as it is just testing. It is definitely worth noting 2 things.

1) Richard Philippe was in fact Genoa's driver which all but tells us that we should fully expect Nelson Philippe in the IndyCar Series either as a driver for Conquest/HVM/Coyne (as they have the open spots), or as a driver for the rumored Team France the Phillipe family intends to start by buying the Roth Racing team. & 2) Richard was no only fast, he set a track record my friends, the Philippe's are no joke; they may have money, but that doesn't mean they don't have talent. 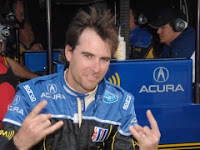 --And lastly and easily one of my most favorite stories in a while. As was being rumored around the news circuit for about a week now, Bryan Herta has officially purchased the Indy Lights equipment of Playa del Racing, to start Bryan Herta Racing. I think all IndyCar fans have the be thrilled; firstly, because finally another veteran alumnus of IndyCars is deciding to stay on as a owner and driving coach rather than going to sports cars or disappearing to a quieter life.

Secondly, I don't know a person out there who doesn't like Bryan Herta; the man volunteered to step out of his ICS ride so AGR could hire Danica only to be later shafted and dropped from the team mid season last year; I think we all want to root for Bryan, and this gives us that opportunity. We know he can be a great teacher as evidenced clearly this last April when Danica finally won in Motegi; Bryan was the very first person she mentioned and thanked.

What makes the story more curious though, is that reportedly all the equipment he bought was delivered to the Vision Racing headquarters in Indianapolis. If you'll remember, Herta was hired on as a driving coach to Ed Carpenter and AJ Foyt IV last season so you know he already has a relationship with the Vision team; and partnering his Indy Lights program with Vision, even if only in name, will allow them all to benefit from the bonus testing allowed to teams who have Indy Lights programs. While no one has reported it in any way, Herta has repeatedly said he's not done with racing, I'm going to be the

first to say I'm thinking it... Herta in an extra Vision ICS car for May??

Much like Sam Schmidt though, if I were an ICS owner, I would definitely be interested in any driver that came through Indy Lights as a protege of Herta's.
Posted by Allen Wedge at 1:16 PM