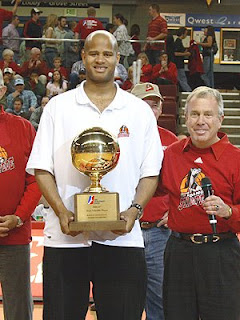 As LSU is about to tip-off against Xavier, I am struck with memories that I might as well share here during Blogathon.

I used to be a HUGE college hoops fan. High school too. I grew up in Louisiana and went to as many LSU and UNO games as I could. I listened to almost every game on the radio and watched the ones that came on TV, including the stupid Mardi Gras Miracle.

But after all that watching and listening, the one LSU memory that sticks out most is the sight of Randy Livingston's knee being destroyed. I had watched him so many times in high school (with teammate Peyton Manning) during a career that earned him TWO National Player of the Year honors. He was a couple of years older than me and was like Superman as far as I was concerned. He was the next Michael Jordan.

I guess it's kind of sad that his career ended this way, but it's also good to know that he was happy and made peace with the situation. Should be an inspiration to younger athletes.

As for Xavier, well... I hate them. I always will. I never used to hate them. Not until my sophomore year of high school. That year I went to every single UNO home game. Coach Tim Floyd had spent the last few years assembling a great assortment of college talent that could compete with any team in the country. They went undefeated in the Sun Belt Conference and were like 26-3 heading into the NCAA tournament. But then Xavier crushed them, by about 20 points, in the first round. It was heartbreaking. I hate them.

I guess you know who I'm rooting for tonight!
Posted by Mike at 7:40 PM