Some Can't Catch a Break; & Some Scream Like a Pterodactyl

As the week goes on, we're getting more and more news and crackpot theories from the world of motorsports (updates coming soon), but first lets delve into the great action in Melbourne.

For Men's Singles tennis for, I don't know... 5-6 years?, it's been Roger Federer vs. the field. The man won 13 Majors and most tournaments he entered, actually having a bet/race with Tiger Woods to see who can get more Majors in their career. Most recently though, Rafael Nadal proved himself to be Federer's equal, besting him a few times and most recently in what some call the best match in the history of tennis at Wimbledon. But what about "the field"

Well, U.S. of A.'s Andy Roddick won a U.S. Open once upon a time before all this, and then what? Well... Federer happened. Roddick was 0-6 against Federer in Grand Slams (3 of those coming in finals and 3 more in semi-finals) and 2 out of 17 all time. So Roddick had enough, hired a new coach to whip himself into shape this offseason and work on improving his game more. specifically so he could beat Federer. Well Roddick clearly lost much weight and improved his game; Federer himself even admitted this after their semi-final match last night: 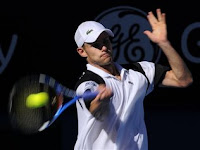 “I thought he played a bit more aggressive with his backhand … Played a bit more flat, so the ball goes through [the court] a little bit more. I really think he improved [his] returns. The second serves he takes more easily. I have the feeling he's improved at the net. He's a better mover. Before, he didn't run a whole lot for drop shots. Today I didn't play 25 dropshots, but I still felt he was running for every ball. He wasn't always doing that. That's also a big key to his game.”

As you've probably guessed though; Roddick is now 0-7 against Federer in Grand Slams. If you watched Roddick play any of this tournament though, you saw a vastly improved and energetic game. Last night he was great, made plenty amazing shots, was all over the court making plays, Federer as always was just a little bit better. Federer simply made, well, Federer-ish impossible, shots pushing backhands entirely cross court or on the line while running, scrambling etc... If you're Roddick; what do you do? What can you do?

For Federer? Well barring a huge upset, it looks like Federer will be getting his chance for revenge against Nadal and a chance to take the #1 ranking back.

And speaking of rankings; Does anyone want to be the #1 Ranked Female? Ever since Justine Henin suddenly retired from the game giving up her #1 ranking with it, its been a smorgasboard of women who shortly have held the ranking. With current #1 Jelena Jankovic going out 3 rounds short of the women's final; does anyone want to take the ranking and keep it?

We're bound to find out as #3 Dinara Safina will meet 2 Serena Wiliams who both won their semifinal matches in quick straight sets.

Serena though had a peculiar opponent who I had not yet witnessed as I've been away from tennis for a while. The #4 Elena Dementieva is one of the most interesting players I've seen in some time. Because she's a good looking girl you say, well yeah she is but no that's not the reason; because she has a good game, again she does, but no. 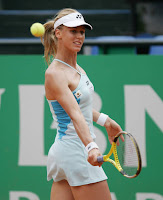 No what struck my out of nowhere was, during her match with Serena, she botched a great chance to get a ball past Serena. While some would shout, curse, look down in disgust, throw the racket... Dementieva let out what I can really only describe as the most piercing sound/screech I have ever heard in my life uttered by a human being. Seriously you would have thought her leg just snapped in half.

I've seriously been scouring the internet trying to find audio or video of it, but no luck. People have talked about it, some call it a piercing scream, it technically was 2 screams; but I think I know most what it resembled. Go get yourself a copy of Jurrasic Park III, and go to the scene where they get trapped in the pterodactyl cage; take their screech and highten the pitch a couple notches and thats about what Dementieva did...

Elena Dementieva, you have now become the player I wish most to see play again, and hopefully do well, but have a shot somewhere not go the way you want it...
Posted by Allen Wedge at 2:59 PM

Dementieva, during a match against Venus, had an even louder piercing scream at Wimbledon last year. Unreal, to say the least.