Sorry we killed you! 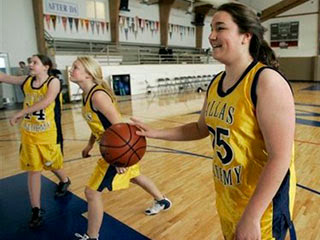 So by now you probably know about the girls basketball game in Texas where Covenant School (a Christian school) defeated Dallas Academy 100-0. Forget about the fact that Dallas Academy has only 20 girls enrolled in school, with 8 suiting up for the team. Also forget that the school caters to students with learning diabilities, such as ADD and dyslexia, as this really has nothing to do with on-court performances.

The one thing we need to focus on here is that the Covenant coaches, the adults leading the children, had their players pressing and shooting 3-pointers in the 4th quarter. The school can issue all the apologies it wants; however, apologies will never erase the memories from the minds of those girls on the losing end. Steal after steal, lay-up after lay-up, 3-pointer after 3-pointer. Parents and coaches cheering, elated. That's what those girls will remember. They will remember that, in a game that meant nothing, a game played by kids, the adults in the room put their own pride and egos ahead of the feelings of the kids on the court.

High school basketball is not the minor leagues. It is not a college try-out, leading to a path of NBA (or WNBA) stardom. These teams exist to instill the concepts of leading, following, and working together to accomplish team goals. These students should be allowed to feel confident in themselves and should never be embarrassed for not being as talented as a teammate or an opponent. It is the adults' job to make sure this happens. Coaches, refs, parents, teachers, possibly even administrators stood by and let this happen to these kids. Every adult in attendance should apologize. The Covenant coach should be disciplined, by the school and the state athletic association. Otherwise, we're setting some of the game's participants up for failure later in life... failure at being a good person and doing the right things.

Finally, I will not accept the arguments:

1. "These two teams never should've been matched up together." - Too bad. They were. Doesn't give you the right to crush them. Kids don't make the schedule. Adults do.

2. "We should teach our kids to always play hard no matter what." - No, we should teach them to use their gifts and talents to the best of their abilities UNLESS they are using them to bring someone else down with no good reason. There was no reason to win that game by 100 points except for the selfishness of adults.

3. "Life is tough, get used to it." - High school sports are NOT life. They may assist in developing life skills, but these kids are not professional athletes. They go to math class, they do chores, they go to church, they take music lessons, they play World of Warcraft, they text, they play. They're still kids.

A while back, in my hometown, there was a game between two very good high school teams. We didn't use a shot clock and these teams decided to run their offenses and try to control the ball, keeping it from the other team for as long as possible. The final score was 7-2. I'm positive that game was more exciting than a 100-0 blow-out.

Remember when Stephen Curry was held scoreless yet his team won? He essentially sacrificed his own stats that night to give his team a 4-3 advantage on every play, assuring his team of an easy victory. What a moron. Didn't his high school coach teach him about running up the score and getting as many points as he could?
Posted by Mike at 11:41 PM