Well, I did it. I finally got an NES emulator and have Tecmo Super Bowl running on my computer. The Furious Wedge wants you to know who is going to win the Super Bowl this weekend. Now, we can sit around and guess all we want, but if you want real answers, why not just have the computer play the game for you? And that's what I did. You're welcome.

Of course, by using a video game from 1991, some (OK, all) of the players will be different. And sure, the Cardinals now represent all Arizona residents and not just Phoenix. But other than that, there's not really much difference.

So who won? Well, I'll give you all the highlights:

Steelers won the flip and elected to return. Del Greco kicked off to Stone who ran it out to the 35. But Brister came in and threw an INT on the very first play. Rosenbach completed a 39-yard pass to Proehl (his only catch of the game) and Johnny Johnson quickly ran in the TD. 7-0 Cardinals.


That was the end of their scoring.

Brister immeidately drove the Steelers down the field and threw a 35-yard TD to Derek Hill. 7-7 at the end of the 1st quarter. 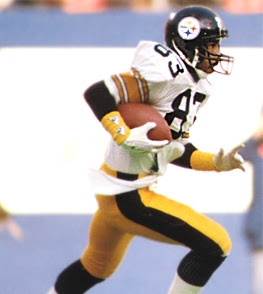 The 2nd quarter saw the break-out of the Steelers' Warren Williams, who got the Steelers down the field. Brister connected with Louis Lipps for 30 yards and Merrill Hoge ran in the TD. The Cardinals drove back down the field, but Del Geco missed a FG at the half. 14-7 Steelers.

In the 3rd quarter, Pittsburgh's Anderson kicked off to Sikahema, but Phoenix quickly had to punt. The Cards' defense looked good, but on 3rd-and-24, Brister completed a 45-yard pass to Williams, who also capped off the drive with a TD. 21-7 Steelers.

The Cards started the 4th quarter with an excellent drive. Rosenbach was running and passing down the field, but then threw an INT in the endzone. Brister turned around with a 55-yard TD strike to Williams once again. 28-7.

In their last drive, The Cardinals could not convert on 3rd or 4th down, with Ricky Proehl dropping two passes. Hoge ran in the next play for a TD as time expired. Final score: 35-7 Steelers.

Brister threw for 218 yards (138 to Williams alone) while Rosenbach managed only 58.

So... look for Roethlisberger to have a big game while Kurt Warner struggles this Sunday.

Stay tuned for more Super Bowl nonsense over the next few days!
Posted by Mike at 1:37 PM

i am totally going to do this same thing. let's see what happens.

Well... this was actually pretty entertaining!

ARI wins the toss, and starts off with the ball at their own 40, due to a horrific kickoff. One long pass to Williams, all the way down to the PIT 7, then Johnny Johnson carries it in on the very next play. ARI 7 - PIT 0.

PIT starts off on their own 45, due to an even worse kickoff! Brister gets sacked on this drive by J. Wahler, and then this: The very next play, Brister throws an INT to McDonald, who then in turn FUMBLES it, into the hands of Williams who runs it down to the 6. Then, Williams finishes the drive off with a rush TD. ARI 7 - PIT 7.

The Cardinals come out furious. Dinking, Dunking, Reverses, Flea Flickers - a nice beautiful long drive that seems may run out the entire half. They get down to the 17 and miss a FG, which would be the start of a long day for Del Greco, personally.

PIT starts on their own 15, and go three and out.

ARI gets it back, trying to make the most of ball possession, running all over that "steel d." And again they get into FG range, and again Del Greco misses. This time from 49 out.

PIT gets it back, and succeeds with getting into FG position, but fails to convert.

PIT receives and goes three and out. Brister is having a horrendous Super Bowl, and it's only about to get worse.

ARI starts at their own 20. They drive a bit, and out of nowhere Rosenbach launches down the field to Johnny Johnson for a 40 yard diving catch. And if that wasn't exciting enough, on the very next play Johnson grabs a high one out of the air, weaves his way up and down (because football is played on a two-dimensional plane) through the PIT satin curtain, and runs it in for a reception TD of 38 yards! ARI 14 - PIT 7

PIT's Stone has a nice return all the way out to the PIT 49, and it seems as though the Steelers are gonna make a game out of this, yet. Until. Brister, throws another INT just two plays into the drive, almost driving a dagger into their 8-bit hearts.

ARI takes advantage by converting on a long pass from Rosenbach to Prohel for about 60 yards, down to the PIT 8. Who else, but Johnny Johnson gets the TD carry, and all the glory. ARI 21, PIT 7.

It's at this point that the 4th quarter begins, and the Steelers also manage to get their FIRST first down of the game. However, ARI makes a fourth down stop, and takes over at PIT's 30.

With three quick unsuccessful plays, Del Greco lines up for his third FG attempt of the game. You guessed it. NO GOOD. Del Greco is 0-3 in the most GIGANTIC game of his life. Because of these major follies, there is still enough time for a miracle comeback by PIT.

And, it looks as though they're gonna make it interesting. They drive it all the way down into the red zone, until Brister manages to throw ANOTHER INT at the 3, only for it to be FUMBLED, and picked up by Hoge, and run in for the TD! What an exciting drive! ARI 21, PIT, 14. 1:10 remains.

The onside kick fails, and the Cardinals own prime real estate. It seems real easy from a coaching standpoint to just run out the clock, however, HeadCoach Cardinals decides to throw the ball, into traffic mind you, and has it INTERCEPTED at PIT's 17. 24 seconds remain.

Bristers makes a nice throw down to the 50, but on the next play he's intercepted, and time runs out. Cardinals are going to Disneyland. Del Greco is going home, and mostly likely staying there for the rest of his career.

I like that not only were there drastically different outcomes; but that both games themselves were crazy in their own right.