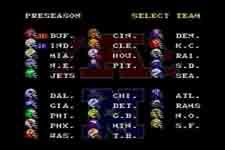 OK, not only is it time for me to start posting here again (even if only to break up the racing talk from time to time) but I think it's time to do something that is not done nearly enough...

Let's take a look at today's NFL Conference Championship games and decide who will win... by comparing the teams' Tecmo Super Bowl rosters! Call your friends and place your bets, because this is going to be a 100% guaranteed lock.

First the NFC game. 2 words: QB Eagles. The Eagles had a great defense too, but seriously... if you didn't line up in shotgun and run with Cunningham (I mean "QB Eagles") at least once a series, then you were wasting the powers of a late-century superhero! Who was the Phoenix Cardinals QB anyway? No clue. It's settled. Eagles win today.

Now the AFC. The Steelers didn't have much, with Neil O'Donnell, Merril Hoge, and Louis Lipps leading the offense. But the Ravens didn't even exist! Steelers win. You're welcome.

OK, I suppose I have to be fair and look at the Browns, since they became the Ravens. I guess the Browns' threat was Kosar to Slaughter and Langhorne? The Metcalf/Hoard RB tandem? Or was it Mack? Either way, it sounds better than those Steelers players, so go ahead and pick the Ravens.

Tune in next week, when I may actually try to PLAY the game between the two Super Bowl teams and give you a winner.
Posted by Mike at 11:52 AM

Basically do the opposite of what I say. I can't believe the Eagles lost that game.

we're trying to set up a tecmo tournament up here. i can tell you this: i will definitely not be the cardinals OR the steelers. i might take a look at the saints.