Firstly in the smaller news of the day; Bryan Herta Autosport was officially announced as an Indy Lights team with American Daniel Herrington as it's driver. we'll say it again, we'll be rooting for Herta to do well in anything he does, and we're glad to see him back as a part of IndyCar racing.

There's also a bit of rumor from a sentence in Robin Miller's most recent article that Davey Hamilton is planning on starting an Indy Lights team as well as trying to run in the Indy 500 again. If Davey should do this (Indy Lights part) it would be great and right up there with Herta. It should come as an easy task as Davey and his dad already run many teams in many leagues. Mrs. Wedge will most assuredly love any chance to cheer for her fellow hometown childhood carpooler's cousin.

Thirdly: Dale Coyne Racing has hired engineer Bill Pappas, formerly of Patrick Racing, Ganassi Racing, and Panther Racing. Pappas has worked with the likes of Jimmy Vasser, Gil De Ferran, Juan Pablo Montoya on his 500 win, and Dale Coyne possible sophomore Bruno Junquiera. It is great to see this move from DCR, as obviously they wouldn't be hiring anyone if they didn't intend on racing in 2009; and this should be the Big news on the circuit, but unfortunately its not...you know because its positive and all...

Now on to the non-surprising bigger news of the day:

As everyone already suspected the IRL's John Griffin has confirmed that DirecTV has pulled their sponsorship of the IndyCar Series citing the move to new TV partner Versus (who is owned by Comcast):

“One of DirecTV’s biggest competitors is Comcast,” Griffin said. “They felt it didn’t make sense to have their logo and support in a position where it supported a Comcast initiative in any way.”
A lot of people seem to think this is the IRL's mistake in going to Versus as they should have known DirecTV would pull sponsorship as a result. People need to remember however that the league ran many years without a presenting sponsor, it can do just fine without and/or finding a new one (I recommend maybe asking Comcast). It however would be a devastating blow to lose live broadcasting of their races (remember ESPN did not want to continue showing all the races anymore), plus the NUMEROUS many other reason we've listed here at FW already about why the move to Versus will be good at growing the product of IndyCar.

Now I will say this: John Griffin, Terry Angstadt and anyone else associated with the IRL NEED to stop saying things like this to the press: “We just had a meeting Monday with a very, very big corporate brand name.” Whether or not they had a meeting and how promising it seems, is irrelevant. It is Public Relations 101, that you do not reveal your own negotiations until they are certain to complete; and even then there's no reason to spoil your own announcement. If it goes through, sure you look fine, but there are any number of things that can end negotiations prematurely, and whether they are your fault or not, will never look good for all involved.

Now onto the 2nd non-shocking news of the day. As correctly reported by seemingly few Bobby Rahal confirmed to news sources that Rahal-Letterman Racing does not currently have a sponsor and needs one to go racing in 2009. A lot of people are up in arms wondering how Bobby Rahal & David Letterman can't come up with the money, assumed they have in Uncle Scrooge's money bin, to get their car on the grid.

Its perfectly understandable honestly; they are running RLR as a long-term business, not for the aspiration of racing. And I'm not saying that it is a bad thing to do; many IndyCar teams run as a business and there are teams who are just so hungry for racing that will do whatever it takes to get out there. What this does tell us is that RLR might love IndyCar racing, but not enough to spend their own dollars; its a business for them, and that's fine; they still have other series to race in should they not answer the IndyCar bell in 2009.

What everyone should be wondering instead; is how exactly RLR will ever get back into business as a IndyCar team any year? Their last 4-5 years of ICS team(s) have been funded at least majorly by sponsors connected to their drivers (Paul Dana-EPIC/ethanol, Scott Sharp-Patron, Ryan Hunter-Reay-IZOD, Danica Patrick-Argent). I'm thinking Centrix or Menards was "their" last sponsor, 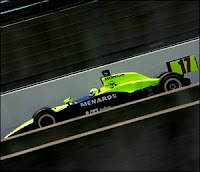 and that was rumored to be due to Mernards really liking that young upcoming Vitor guy that was driving for them; whom RLR then dropped, and soon went Menards too. Now we know Letterman and Rahal both have name recognition and business savvy, but as a fan of the team, their track record of landing sponsor does not bode well for their fans.


side-thought: You also have to wonder what IZOD is thinking of their Hunter-Reay sponsorship. If I recall right, they did film a commercial with him in a car for future use; what good is that to them (and the awesome line of apparel they were ready to push) should he not get back into the series?
Posted by Allen Wedge at 9:28 PM

hey now! OOW correctly reported the story! (we used "allegedly" and said they were still looking for sponsorship!) We even tacked on the additional statement as it's own story as a courtesy ;-)

Seems like Lights is the place to be! I'm curious what the monetary difference is between IndyCar and Lights as far as running costs and sponsorship ROI.

I couldn't agree more on the things they need to stop saying! I even alluded to it in my story on OOW. I HATE when they (anyone) throw the "big meeting, big sponsor, big news" bullshit out there. It makes everyone involved look stupid in the long run.

Yeah sorry about the en-masse inclusion; I hope I've adjusted it better.

From what I understand Light is one of the most economical/bang for your buck investments a team/sponsor can make. No pitting alone removes the need for many crew members.

and yeah, I spent my last 5 years as the head PR/Mkt. person for an orchestra; and the biggest headache I ever had to deal with in that time was when a stupid upper in the organization decided it would be ok to tell their 'friend' at a party (who also worked for the biggest local entertainment magazine) about negotiations we had just barely entered with the local college to try an outdoor concert on their baseball field.

When I come into the office the next day we're all fielding calls and reading news from local radio, tv and print asking for details on our new outdoor concert we're doing. Needless to say the college was not happy, we were not happy and the whole thing ended up falling apart as a result of one idiot; and we all looked 'great'

bwahaha! I was just yanking your chain! but thanks for the linkage!

There has got to be a way to lessen the gap between the tiers then. Seems kinda pointless to have a thriving ladder system that leads to a deconstructing top tier no?
It was the same with Atlantics->CC. I remember in Vegas in 07, 26 fully liveried Atlantic cars rolled down pitlane to take to the track, followed by 18 barely sponsored Champ Cars. Crazy.

ya, as excited as I am to get the inside scoop on something, I'm also ridiculously careful about keeping it to myself. The "glory" of scooping everyone is much less appealing if it can potentially ruin it for everyone. I've seen it happen too many times.