OK, I had some computer issues to work through this week, but I'm back. Sorry for the delay. Time to pick up the MLB Previews, starting with... 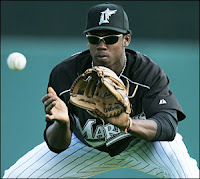 IF (4/5) - Pretty good. After Uggla and Ramirez, Sanchez looks like he'll get 1B with a good spring, which would allow Cantu to play 3B. Helms, whose average has dropped nearly 100 points since his last stint with the Marlins, could outplay Sanchez this spring to win 3B, moving Cantu to 1B. Plus McPherson could always decide to be awesome some day as well. Good problems to have, I guess. I like John Baker at catcher (though a similar statement currently has people emotionally blogging about me in Brewer World). As a Hanley fantasy owner, I don't know if I like dropping him out of his comfortable lead-off spot. We'll see...

OF (3/5) - In 32 at-bats, Maybin looked like the next Willie Mays Hays. The good version. But can he really sustain that over a full season and justify moving Hanley out of the lead-off spot? Or is he Felix Pie with less power? His 49 Detroit at-bats (.143 average) weren't as encouraging, though they were the first of his career. Ross and Hermida will be good hitters for the 6-7 spots, which is where they're currently scheduled to hit. Brett Carroll will get a chance to win a job, but he'll also have Luis Gonzales and Jay Gibbons to compete with. If Maybin doesn't work out, I suppose Amezaga plays CF.

SP (2.5/5) - Definitely some potential here. Nolasco surprised me and Johnson pitched well last year (and in 2006). Volstad looked good and Sanchez has pitched well at times, though he's coming off of an injury. Some questions here.

RP (2/5) - Lots of questions here. Why did they trade Kevin Gregg? I don't even know where to start. The kid from KC looks good. Is Lindstrom a closer? I'd be worried if I were a Marlins fan. But... aren't they on pace for another World Series soon? What do I know?

[Disclaimer: I do not claim to be an expert on your team. I think it's fun to do this stuff before a season starts and then see how close (or how far off) I was. If you spend time from your day insulting us, telling others to insult us, or posting in a blog or messageboard about how wrong our opinions are, then we are flattered!]
Posted by Mike at 7:11 AM

The Marlins will rue the day they ridded themselves of Reggie Abercrombie!!!