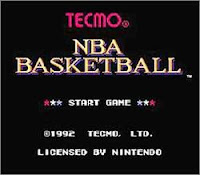 Since I've recently been able to rediscover the joys of NES games, I decided to give Tecmo Basketball a shot. I never played this game, but I wish I had because it's awesome! I don't know why we never knew about it. We always played Double Dribble or Hoops. Then on SNES we started playing Live 95, which is the best basketball game ever.

For my first Tecmo Basketball attempt, I decided to play an All-Star game and see how today's game would turn out. While Jordan is my favorite basketball player, I decided to be the West to represent my team, the Hornets (who might not have even existed and were surely not in the West when this game was made). So since I'll be pulling for the West tonight, the West it was. 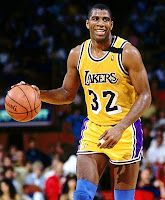 This game is total run and gun. The big, slow guys barely have time to get up the court, as illustrated by the final point totals. Also, if you're familiar with Tecmo Bowl and the idea that running diagonally is much faster than running straight ahead, you'll appreciate the fact that it's the same here. You'll want to weave your point guard up and down the court. 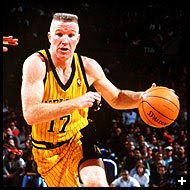 My game started off with Magic Johnson giving my team a 2-0 lead. But the East started scoring and Clyde Drexler picked up three charges in a row for me! I learned not to be so aggressive and I also learned Chris Mullin was my shooter. While Jordan and Pippen continued to dunk in my face, I didn't want to risk charging fouls and elected for mostly jump shots instead.

In the 4th quarter, Michael Jordan hit the East's only 3-pointer of the game (taking a break from all the dunking) to take a 52-51 lead. Mullin went right down and hit another three to make it 54-52. But that was my last lead. Suddenly Drexler picked up two more fouls and Magic started throwing the ball away. I lost 61-58.

Now all I know is that the computer was always good at cheating on Tecmo Bowl! Think the cheating has carried over here? Look at the fact that I had 5 turnovers and they had zero. Or how about my team's 10 fouls to their 1? The worst part is Jordan and Pippen had SEVEN dunks EACH, yet Magic's was my only one because they kept calling charges on me.

I also didn't know how to call time-out, while the computer did obviously. I'll have to figure that out.

Is this a sign? Will the East pull it out tonight?
Posted by Mike at 2:32 PM