This weekend the A1GP series hits the historic in Kyalami Circuit in Gauteng, South Africa; home of the former South African Grand Prix.

Unlike most all of the previous A1GP rounds which happened in the middle of the night U.S. time, this one happens very early in the morning. So when I first woke up this morning and saw the practice session times going on, I couldn't figure out if I was still fuzzy from waking up because there seemed to be a lot of things missing from this mornings test sessions.

As we previously reported Team Germany and Team Pakistan were both scheduled to make their 08-09 debut for this round. While Germany did in fact make their debut in stunning fashion topping the speed charts for most of the practice (ending in 2nd to Lebanon); Pakistan not only didn;t turn in any times, they weren't even on the entry list anymore. This comes as strikingly odd considering Team Pakistan just tested their car in recent weeks at a circuit just near Kyalami. In an additional oddity, Korea is also missing from the entry list now, meaning it looks like we've added a team and lost a team for this round. 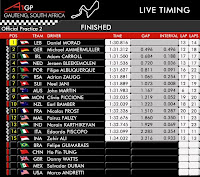 The additional oddity was the track activity itself in Gauteng this morning... or lack therof. For the first 15-20 minutes of the rookie-test session no one felt like going out; it could have been track condition or rubber-in issues, who knows by the end of the rookie session only 10 teams hit the track. For whatever reason after all of the day's practicing, 5 teams still have not put their car on the track (USA, Mexico, Great Britain, China & Brazil). We haven't gotten any reports as to why, but it sure seems odd that 5 teams never saw the track, 2 have gone missing from the entry list and even Australia turned in a measly 6 laps (yet still was good enough for 8th on the charts).

Come to think of it... A1GP took their drivers out for some public relations events, one of them at a local wildlife preserve earlier this week where drivers hung out with tigers and even had what looks like a foot race with a cheetah. Then again, maybe they aren't racing the cheetah, and maybe that is where our missing drivers have gone??

UPDATE: A1GP has announced that it was a new-part issue that kept all those teams off the track; not cheetahs. Something to do with needing a fuel system upgrade due to the high altitude of Kyalami Circuit. These teams will be getting additional practice time tomorrow. Also in a second announcement to Furious Wedge's liking; it looks like the power-boost qualifying option is coming back. For those unfamiliar, you do 2 hot laps for the Sprint Race and 2 for the Feature race in A1GP qualifying, and for 1 of those 4 runs you are allowed to us the power-boost button, for the entire lap! It certainly helps with parity and better racing as a result of mixed up starting grids, and we like parity.


In IndyCar News, we are all delved into Silly Season; Robert Doornbos says he will be at Homestead for testing and he has definitely been replaced in A1GP Team Netherlands' car; Conquest may run their two drivers from 2008 in the same car, Dale Coyne says he's announcing drivers (plural) at Homestead, word on the street is that Ryan Hunter-Reay may likely be in a 2nd HVM car (a team RHR has won with in the past), and then suddenly out of no where we find out Tomas Sheckter has sponsorship and may be in a ride come 2009.

UPDATE!: Doornbos has now officially been announced at Newman/Haas/Lanigan, but still no word on Milka being brought into that team with a pile of cash in sponsorship. We will be definitely be looking forward to seeing Bobby D. in the ICS after watching him contend in the new A1GP cars on short notice. Doornbos, clearly excited for the opportunity states:

"Racing in the IndyCar Series has been my biggest dream and especially to do it with Newman/Haas/Lanigan Racing. The history of the team and the big success they have had in the past really attracted me and it makes me proud to become part of this winning team. Racing on the ovals should be very exciting. It will be tough, but I'm training as much as possible and am in good condition and ready to achieve results. I'm also excited to race in the legendary Indy 500."

While the rest of those are still waiting to be panned out, we have gotten word straight from the mouth of Vision Racing that A.J. Foyt IV, while currently out of a full season ride for 2009 due to lack of sponsorship, will still be piloting a Vision-built IndyCar at Homestead next week:

First, its great that VERSUS is putting their logo on a car and doing some promo's with it; seriously, it can be good exposure during TV broadcasts and commercials and hopefully at the tracks for races (if they bring the car out there and have a VERSUS booth at the tracks); but here's a thought:

Why wouldn't it be in good interest for VERSUS to actually sponsor a car?? Their colors alone would make a sweet looking paint job?

Pictures from a1gp.com & indycar.com
Posted by Allen Wedge at 11:55 AM