Buddy Rice in at Rubicon!? & Why Milka at NHL is Not a Bad Thing!

As we alluded to in our last IndyCar roundup; it looks as though Roobert Doornbos and Milka Duno will in fact be racing for Newman-Haas-Lanigan according to now Robin Miller (and Curt Cavin acknowledging to word spreading). A lot of people are shocked and quite a few are mad, pissed, or at least shaking their heads and I'm going to tell why you should be happy about it! 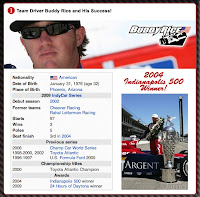 It was being rumored by some (even us at Furious Wedge during blogathon) that it may happen, and it now looks as though Buddy Rice will be the new driver for (hopefully) a newly full time Rubicon Race Team. Now NOTE: Rubicon still has yet to officially announce both their merge with Pacific Coast Motorsports and the announcing of Buddy Rice as their driver.

So yes technically nothing has been made via public announcement; however, there is a pretty good chance that Rubicon did not add PCM principles Tyler Tadvic & Doug Boles to their owner's

page and Buddy Rice to a 'new design to unveil' drivers page for the hell of it. I think we all will be looking very much forward to see what this combination of team and driver can do. Don't forget this is not a new team, just new to full time (assuming thats what they are doing). These guys have plenty Kelley Racing ties, and now parts of PCM also along with a relationship with Sam Schmidt Motorsports; t

his should be a very good team very quickly. The bigger question here at FW, is with PCM and Rubicon's history... how badass will the paint job be on this car?

Now back to the "shocking" news. Yes, I agree that I never thought I'd talk about Mario, Mansell, Michael and Milka as the list of drivers who went through what is one of the most succesful racing team in the past 2 decades. But that is in longview; in all honesty, in our current economic times it does not shock me in the slightest. That any team would take in a driver with considerable backing to help fun their overall operation, especially a team who was lacking a sponsor for its 2nd car in all but 1 race in 2008 makes it even more understandable.

Now a lot of people want to proclaim how this is horribly stupid of the team to do; how its destroying their "legacy" or some sort. And if you think that you need to realize its anything from it. IF... Milka Duno somehow manages to destroy the Newman-Hass-Lanigan team, then yes its horrible, but we all know that isn't happening. But that still isn't my big point as to why you should be ok and happy about this and that is as follows.

Milka Duno did NOT replace anyone by signing at NHL. Yes Justin Wilson is not at NHL (or anywhere very unfortunately) right now and that sucks. But Milka didn't "buy him out" of his ride. Because of Milka fans not only get another car on the track (in a time when people are generally worried about car counts), not to mention theres quite a good chance she brought along a little extra funding that is helping the team field Graham Rahal and Robert Doornbos to their full capacity.

Milka signing also keeps (and adds) many mechanics, engineers, strategists & general crew people employed in what is possibly one of the most fragile times in motorsports. If you know and understand this and you still don't like Milka signing at NHL, you're an idiot.

Am I saying I love Milka, No. Am I even saying I think shes a great or good driver, no... but she was very much improved with Dreyer & Reinbold last year finishing on or just off the leap lap multiple times; and that is also discounting that she would have finished on the lead lap of the Indy 500 had Buddy Lazier not chopped her into her spin, and at Chicagoland had they not left her out of pit strategy just so she could lead a few laps (however gaining her experience to that situation).

To go from the horrible 2007 (which was additionally marred by SAMAX's lack of experience) to what she did in 2008 shows the most important trait a real driver needs. She was learning and improving. Something that really can't be said for Marty Roth who dropped like a rock dangerously anytime he started/restarted in front of other cars. Milka held positions and never became a rolling chicane on the ovals; she's incredibly nice (though slightly intelligible) but great with fans.

Did she get the ride because of money, sure; but if you think NHL is just going to take the money and push her out onto the track, you're kidding yourself. NHL is too good of an organization to not try and improve and help Milka do well, not only for her, but for them as well; and lets not forget that we have multiple race winner Robert Doornbos on the team as well next to Graham Rahal, if Milka helped that happen in any way, I'm happy.

The most important part of all this news recently is that in the past few days we look to have added 2-4 Indy Lights teams and confirmed/added 3 more cars to the IndyCar Series bringing the confirmed car-count to 20, and thats not counting that Dale Coyne is currently hiring personnel, HVM has said it plans to put a 2nd car out & likely Sarah Fisher upgrades and a DRR & Vision 2nd car as well as others like Conquest pulling it off.