The Furious Wedge would like to announce plans on attempting to start a team for competition in the International Tiddlywinks League. The team, whose mascot will be a giant pissed off slice of pizza named Fury-o-Wedge, intends to enter into ITL competition starting in the Spring of 2009. 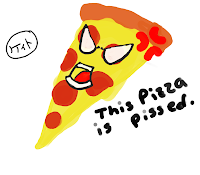 Team co-owner Ron Furious stated: "The Furious Wedge has dreamed of entering the league for a long time, but we wanted to make sure that we did it right. Our new team is now ready from a resource standpoint with roughly 50-60 million little pieces of plastic tiddlywinks to expend in competition. We are in the process of locking up some of the best plastic engineers and aerodynamic experts to give us top of the line equipment for competition."

As far as the starting tiddlywinker lineup, 2nd team co-owner SandWedge divulged: "We haven't actually talked to any of them to even gauge their interest but we'd love to be able to get Danica Patrick, Lebron James, Travis Pastrana, Ben Rothlisburger, Lance Armstrong, Tiger Woods & Big Brown to be the starting Fur-o-Wedge lineup."

Wedge continued: "Now we haven't actually talked to the first six athletes I mentioned, and the last one is a horse; but those kind of details don't seem like the kind of things to stop ESPN from plastering speculation as a story headline as if it is actually happening, and then other news outlets following suit; so we'll take the free PR from ESPN, we know they're good for it."


Like you, I was most surprised I was able to find a picture of angry pizza, the wonders of the internet...
Posted by Allen Wedge at 1:22 AM

LOL! Sadly I believe your Tiddlywink team will get off the ground first and with more legitimacy...