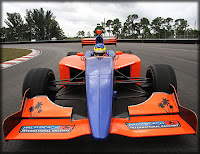 While pre-season testing hasn't always translated into a large amount in the Indy Lights season; the entry list for their Homestead-Miami testing has gone a bit unnoticed under the wake of the IndyCar Series' Silly Season and subsequent entry list TBAs by Dale Coyne and Newman/Haas/Lanigan Racing.

The most striking thing about the Indy Lights list is that Jay Howard is listed as the driver for Ron Dixon's new Team PBIR (yes that would be Scott Dixon's dad). Jay Howard was the 2006 Indy Lights champion but is most recently known to IndyCar fans as the guy who got screwed by the now defunct Roth Racing. He should also be known as the guy who beat 8 other current IndyCar drivers in December in the Snap-on All-Stars Karting Classic; and then went on to talk some smack about Scott Speed on SpeedFreaks afterwards, to just about everyone's enjoyment.

Too soon people forget he had his Roth Racing entry in the Top 5 at St. Pete only to finish 14th as a result of the race suddenly becoming timed and strategies going crazy. He also finished 13th in Kansas; again considering the situation he was dealing with, thats pretty damned good. 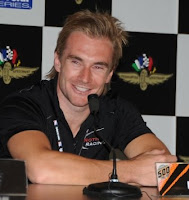 It truly is a shame that a guy who won the Lights championship, now 3 years ago, still can't find a true shot in the big leagues; and even after getting a small shot (if you can even consider it that); is still willing to keep on hammering away at it in Lights once again. Then again, a ride in Indy Lights is better than no ride at all. Give Howard props for the effort, but just hope its not all for naught, and that sooner rather than later he'll get the shot he deserves in the IndyCar Series.

The 2nd thing noticed about the Lights testing list is that 11 of 20 drivers are rookies. They are coming from far and wide including the U.S.A., Canada, Netherlands, Columbia, Brazil, England, Ireland & what I am pretty sure will be Indy Racing's first ever Russian; whose name I know every race reporter is looking forward to attemting: Sergey Mokshantsev.
Posted by Allen Wedge at 12:00 AM

It's a cryin' shame about Alex Lloyd and Jay Howard. Just pitiful. They should've been drivin' IndyCars or A1GP or Formula BMW or something! Milka gets funded, but these potential winners can't? I feel sorry for them. I would rather do something else rather than race in IPS again, years after winning the championship!