Is 2009 Lame Duck for Milwaukee Mile? and "Qualifying"

As we head through this week and witness NASCAR's annual attempt to replicate the playoff system in Baseketball; motorsports fans rejoice that there is big-league racing of some sort going on. The economy may loom, but for now, a good portion of North American motorsports fans can enjoy the Daytona festivities.

In the news though, for IndyCar & NASCAR fans alike; in addition to the looming economic/sponsorship effects we're awaiting, comes further development in the Milwakuee Mile situation. (2nd link below) For those unfamiliar to this developing story; it comes down in the simplest of terms: the current rights owners to holding race events there: Milwaukee Mile Holdings LLC, no longer want to hold races simply because they are losing money (of the million dollar kind). There have not been many movements to make things more lucrative by either the track owners (Wisconsin State Fair) or MMH. In fact so little has been done in trying to improve the track or its marketing that most can easily figure out that MMH considers any more money spent a lost cause, much like the Brewers. 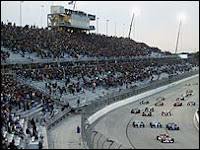 The latest development looks dishearteningly bad however as MMH has exercised an option clause in their contract with the Wisconsin State Fair (track owners) to discontinue their operating agreement in 2010, and sooner if possible. This of course does not have to end bad, yes surely someone could come in and decide they want to take over as the new operator of racing events; but at the present moment it doesn't look likely as the State Fair doesn't seem to be willing to give anyone a fairer deal in being able to correctly run the track for races. You also have to consider that any suitors can't like MMH's reason for getting out to begin with plus it seems the State Fair is simply only offering the same restricted rights to any other future suitors. Its never healthy when a potential rights buyer looks at the details and says: "I don't think any group will make a bid."

This is bad in the least that IndyCar, Indy Lights, NASCAR Nationwide & NASCAR Trucks; who all run at the Mile, would lose a track/race by no fault of their own. Worse yet is that they would all be losing a, not only historic but, at this point a very uniquely differentiated track from all the cookie-cutter high banked ovals that gives them all some much needed track diversity. What a sad state for what is the nation's oldest running racetrack, and one I hope we don't have to continue to analyze. Poor Wisconsin has to put up with the Brewers as it is, lets hope their racing isn't taken away as well.

In other not so great, but expected, news; Barber Motorsports park has confirmed that the Indy Racing League is choosing to forego replacing Detroit's canceled race on Labor Day Weekend. Now, no one is going to fault the league here, the economy took the race down and namely the fact it was in the center of one of the biggest negatively effected markets (auto-industry-Detroit). For IndyCar fans there is no need to panic; however IndyCar did seem once again to turn a negative into a positive as they had a willing track in Barber Motorsports Park, ready to take on that Labor Day weekend for just this year.

Sure, none of us know the behind the scenes details (namely $ numbers), but it is no secret Barber has been trying to get a race for some time now. A track desperate for a race wanting to promote IndyCar is not a situation the IRL has had a whole lot of in its history. The IRL can now rack Barber as the 4th track in half a year it has publicly turned down (also snubbing Nashville, Las Vegas & New Hampshire). Is there a bigger long-term plan at hand? maybe. Would giving Barber the race this late present the possibility of lacking sponsorship? sure. But even while the IRL seems to be trying to get away from its bankrolling days of years past, I don't think there is a person out there who would think of bankrolling any part of getting a race on Labor Day weekend as foolish, especially not for a wanting and hungry track like Barber. To add incentive Barber is in a market (just below Nashville) that you just abandoned, and especially now that we are staring in the face the currently scheduled end of the season: Chicago / off / off / Motegi (late night) / off / off / Homestead; it seems like Barber for Labor Day made enough sense.

Lastly, yes Daytona's 24 Hours are complete and it is now time to delve ourselves into possibly the most prudent practice in uselessness: "Qualifying for the Daytona 500." I'm not going to delve too much into this but to simply say that this weekend I had to answer the following 2 questions (and many more) to Mrs. Wedge and Ron Furious. 1) Ok so of these '35' guys, why do any of them even attempt a qualifying run? 2) So if I were running a team and wanted to make some quick cash, what's to stop me from just finding some old dude who was once a champion for our driver, getting our automatic spot and then parking the car after one lap?

The answers are simply: 1) No idea & 2) Nothing stopping anyone, just look at Terry Labonte this year. I'm actually going to open this one up to you the reader as I really can't claim to know or understand as I think NASCAR qualifying has become about as sensible as soccer's penalty shoot out or NFL and NCAA football overtimes...and that is on top of the fact that qualifying position in endurance/draft racing is mostly for show to begin with. I simply ask: Why do they even have Sunday time-trial qualifying for the Daytona 500?

Final thought: you have to wonder if this may be the end of Dodge in NASCAR looming. They've gone from out of the top to completely weak with the "fastest" Dodge putting up a speed only good for 28th overall and Team Penske (last year's 1-2 finishers) only good enough for 41, 42 and 44. To you Dodge fans, here is hoping that those speeds don't translate in any way to drafting performance.

Pictures by indycar.com & Associated Press
Posted by Allen Wedge at 1:26 AM