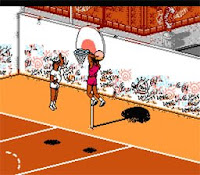 Did anyone see the H-O-R-S-E game? Do you remember Hoops? I think they reconstructed the court from this game. Hmmm... now I want to go play Hoops.

Overall, I'm glad the NBA added this competition. But I'd rather see it on the court. I know it's more of an outside kind of thing, but it'd work inside and would feel closer to the festivities. This was like having the homerun derby at a high school field.

I'd also like to see a fan involved. I don't know if we're scared of NBA guys losing to a fan. But as a fan, I'd LOVE that. Or what about a high school or college player? Make it fun.

In the end, Durant went to his shots he knew he could make to take the victory. Like when that huge girl beat me that time by standing under the goal and making left-handed lay-ups. Last summer.
Posted by Mike at 6:53 AM

See I was confused, when did this thing happen, why wasn't it on with all the other competitions last night??

Yeah, it was outside at some block party. I don't know why it wasn't on TV. Another missed opportunity, I think.