Some Thoughts & Things Learned After A Day of IndyCar Testing

-Well lets jump right in, the first thing we learned is that Panther Racing may likely be the team to beat in Indy Lights. Brit-Pop-Girl Pippa Mann again topped the speed charts on Tuesday, and fellow Brit teammate Martin Plowman again took the 4th spot for a second day. It was great to see both Mann and Plowman running up top as both conceded that during the rookie session on Monday, there wasn't much pack running. They may not have gotten 20-car packs Tuesday, but definitely got to some running with other cars. As I said before, I will definitely be curious to see what Panther and the 3rd part of their new British invasion can do in ICS today.

-And in a kind of related story; SPEEDTV finally got around to fixing Roger Yasukawa's name in their story headline, about 2 days late. Now we get to know the difference between Ladies First, and Lady's First. I do not imagine there is a person named Lady in the Indy Lights Series who owns a First. Also they could be using it as a reference to Pippa (a "Lady") and it being her first test; but they aren't. 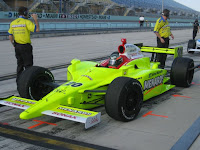 - In Vision Racing news, Ed Carpenter is being stalked by The Predator! Watch out Ed! As per these great shots from Vision and IndyCar we did get our first look at the new #20 Vision machine. Firstly it's dropped DirecTV blue for Eli Lilly Red as the secondary color (if there really ever could be a secondary color with the nuclear glowing yellow) Small things to note, Eli Lilly and Sonax have been added to the car. Sonax simply confirms what we saw on the car ina test a while back but Eli Lilly was A.J. Foyt IV's sponsor last year; that it is moving over to Ed may not be a good sign for A.J. getting a ride in 2009. 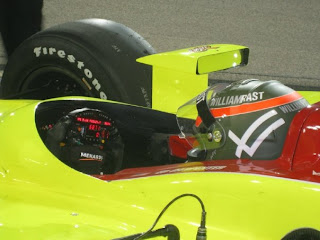 -Also of note, in a closer shot you'll see that Ed Carpenter's new helmet is covered in William Rast and even the camouflage with bright orange scheme. I'm not sure if this means Townsend Bell has lost any deal he had with them or if William Rast is simply expanding, keep in mind they were a rumored potential title sponsor... 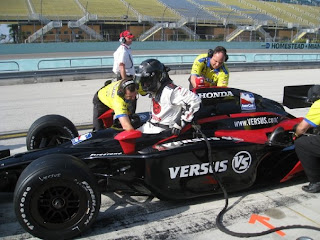 -As we noted earlier: A.J. Foyt IV drove a pretty sweet looking VERSUS car. I have to say not only does the car look pretty sweet, but so does the fire suit A.J. was wearing; I said it back then and I'll say it again, come on VERSUS take this to a sponsorship level, not just because it gives us another car on track, but anytime that car is seen its added advertisement, shoot do it just to make ESPN/ABC mad that they would have to show it!

-Oh yeah and either this thing was the camera car working for VERSUS or the IRL is really starting to lay back on technical modifications to the cars.

- In other paint job news; Marco Andretti will be sporting his 3 major paint scheme in 3 years; and that is if you don't count the 4-5 different changes in last years scheme. I have to say of all the red-white-blue cars, this would probably be my 2nd favorite behind the National Guard car, especially given the large usage of whit,e not usually seen in a r-w-b car... but lets face it, its still yet another red-white-blue car...

- Of actual racing notes, Mario Moraes and Robert Doornbos would have to be the big notes for me. Both driver are hardly considered oval veterans, but to a further extent it looks like KV Racing and Newman-Haas-Lanigan have made some good strides in the may of oval speed with the cars coming in at 4th and 7th. And that's with what apparently Moraes says was, not concentrating on speed:

"It was great to be back in a race car after five months and to be with KV Racing Technology for the first time," the former said after his surprising test run. "Today, it was not about speed, but to try and get a good setup for races..."

-As always its testing, so until April comes around we'll never really know how it translates; as far as those paint jobs go; I'm not sure KV may have just left the ar in its old KV look (haven't seen any differences yet, but also haven;t seen sidepods). As for Doornbos, he's just sporting his name on the side, and I'm not entirely sure if its because they are waiting on sponsorship to clear (from Doornbos or Milka) or if thats going to be the look of the car... lets hope not, and honestly I don't imagine so.

-If A.J. Foyt IV and Vision can't put together their second car, will Doornbos/N-H-L take the #2 they originally wanted?

-Yes E.J. Viso is going to the #13. We love it, and love it more since Viso himself said he doesn't care about any #13 superstition; plus its a lucky number in his Italian heritage. I think it would complete the "luck" trifecta however if he could get a sponsorship from Black Cat fireworks and stick their giant black cat on the sidepods to go with the #13 and green paint.

-Speaking of HVM, Ryan Hunter-Reay was seen in their pits and on their radio quite a bit. Of course this could mean nothing, and it could also mean a giant variation of things, but lets all hope that it means there is a 2nd VM car for him in the works.

-Lets talk new teams and new drivers. Team 3G & Luczo Dragon Racing are making their full-time debut this year and both looked good. Yes neither had Top 10 speed, but neither had years of data to work with either. LDR of course has more data than 3G and it showed, but 3G was hardly an embarrassing pace only 5mph off the lead; not to mention Barrett is likely taking his time getting to know open wheelers on an oval.

-I'm excited about the Rookie of the Year competition this year. 3 of the 4 rookies (Conway, Doornbos & Matos) have winning races and championships in their history and across many different series including Atlantics, Lights, Champ Car, Formula Renault, F3, GP2, Skip Barber, Star Mazda. Those same three were also within 1 mph of each other at testing yesterday so equipment variance may not be too much of an issue.

This is a serious rookie class; and with only 1 banked oval before they get an entire month of May to acclimate themselves to oval racing, I don't think the oval learning curve will really come into play.


Pictures by: indycar.com & Vision Racing
Posted by Allen Wedge at 10:26 AM