Why I CAN hate Alex Rodriguez

Where does it end with this guy? The so-called greatest player in the game took steroids??? Noooooo, say it ain’t so. Look, there’s a good chance a lot of great players have taken steroids; many that I’d probably rather not know about, but I’m not naive enough to think that it doesn’t happen. But Alex Rodriguez? This cat doesn’t stop there. It’s not good enough to be the best player in world. His insatiable drive to be liked by everyone supersedes his moral and ethical boundaries. Let me shed some light on this superb human being.

Alex Rodriguez, while having been born in New York City, claims to be Dominican. You’d be better off researching his membership to Planet Beach tanning salon than you would checking any documentation papers. And for someone who (allegedly) lived in the Dominican Republic and Miami, Florida, his accent is about as authentic as Nicholas C 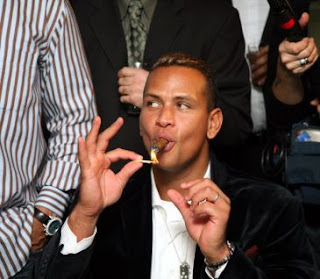 age’s in “Con Air.”
Put the bunny in the box, Alex.
Are you telling me those beautiful green eyes, as clear as a trailer park pool, are his own? Nope. Contacts. I know. You want me to stop. There’s no way A-Rod would stoop to wearing contacts, but he knows no limits, I promise. As hard as it may be to hear this, I owe it to all of you. You WANT the truth. You CAN handle the truth. Between me and you, I don’t think that’s his original hair color. I think it’s actually “Loreal 27 – Sunkissed Blonde.” It’s the box with Lance Bass on the cover. You’ll know it when you see it. “But Deuce, what about his long luxurious lashes? He could be on a Covergirl commericial!” You’re right, he could and he should, considering he’s a walking endorsement for their product. You’ll never see Glam-Rod out on the town without his Liz Taylor edition easy-apply lashes. But the biggest offense of all, those pouty, pinkish-purple lips. Are you telling me that I’m to believe you naturally look to have just kissed a girl and tasted her cherry chapstick? AND that you liked it? That’s a fib. Scan the dugout of any televised Yankee game and while you’ll see most players popping sunflowers seeds like they’re greenies, A-Rod is furiously applying an extra lair of Burt’s Bees Wax Lip Balm. Oh, the shame. He reminds me of that movie where the chick wants to fit in so bad, she cuts her hair, stuffs her jeans and pretends to be a dude until the night of that big party where it’s revealed that she has the most spectacular pair of boobies my adolescent eyes had ever seen. 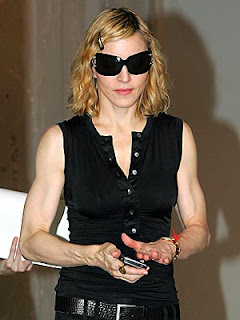 Speaking of which, you know who DOESN’T have a spectacular pair of boobs? Madonna. Dude, seriously. I know you want to be liked, but your gateway to American pop-culture is Madonna? That gateway’s been widened to four lanes and they’ve removed the toll booth. Madonna? Really? That would’ve been some sweet strange in the late 80’s. Now? It’s like when I backpacked through Eastern Europe last summer and every Romanian I encountered asked me if I knew Alf. Catch up, idiot! A-Rod, I can respect your drive and determination. It’s apparently what made you into the player you are, but the madness has to stop. We’re a very forgiving culture. Steve Martin is starring in Pink Panther 2 for christ’s sake. You’ve admitted to the steroid use. It’s time to come clean on everything. Maybe then, Ron will hate you even less. Me, I’ll still think you’re a wiener.
Posted by FuriousDeuce at 9:35 AM

Most ballplayers today are taking homeopathic growth hormone oral spray because it's safe, undetectable, and legal for over the counter sales. As time goes on it seems it might be considered as benign a performance enhancer as coffee, aspirin, red bull, chewing tobacco, and bubble gum.

I'm sure it won't be long before HGH is legalized and allowed by the MLB and the union and I wouldn't have a problem with that. I don't really lose any sleep over the fact that current players have taken steroids. Don't get me wrong. I wish they wouldn't, but it happens. The lies and presumptions towards the intelligence of the fans is what bothers me more.