Why I Can't Hate Alex Rodriguez 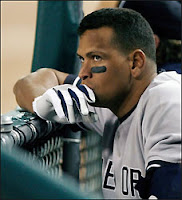 When I watched all that steroid stuff on TV, as McGwire sat there and as Clemens sat there and as Bonds sat there, I just kept thinking, "Guys, just say it!" I don't really even care that they did it during an era where baseball was obviously looking the other way and basically giving you a substantial raise for it. I can completely understand wanting to solidify your job status and make as much money for your family as possible. I'm sure most of them told themselves it'd only be for 1-2 years to get a new contract or something like that. And while I honestly don't think I'd take steroids, I bet many of us would at least consider doing something "illegal" if it helped our family and we believed it would hurt no one (excpet maybe ourselves). So there's really no need to lie about it at this point. If they want to know what you did, just tell them.

Fast forward to this past weekend. We hear A-Rod is busted. Awesome! I love controversy, especially Yankee controversy. And I just assumed he was going to go all Barry Bonds on us and deny it. Didn't you? I don't necessarily hate A-Rod or the Yankees, not like many others do. But it's always funny to see the tough guys struggle when they deserve it.

But then what does he do? He stays calm. He says he is waiting to comment. Dude, I can't dislike you if you're going to make rational decisions like that! You're supposed to deny it. Then he comes out and just confesses. And not like some weak "my trainer put it in my butt and I thought it was vitamins" confession. He actually said he did it and told us why and for how long and gave us useful information. He apologized and was (or seemed) geuninely sincere. Dammit, A-Rod.

I'm serious. If these guys just all come clean, I would respect them and, in my mind, just move on. I know it's not like A-Rod called the press conference out of the blue and just admitted it. But those test results were never supposed to be made public. He knew he'd fail those tests, but was told there would be no consequences for doing it. The results should've been destroyed. I think he handled this situation as well as anyone could've expected.