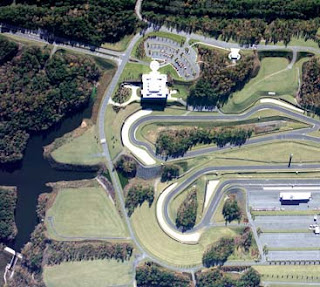 Ok... at this point it is pretty damn clear that George Barber & Barber Motorsports Park is willing to do what it takes, in the way of any track improvements, to get their beautiful natural terrain course on the IndyCar Series schedule.

It is also clear to this point that the drivers, owners, announcers & IRL officials have fallen for the beautiful facility and the fans that clearly desperately want the series to come race on their track.

Now all the drivers have also said the track needs some changes here and there to make a race happen and not be just a parade. But, the thing is; BMP seems very willing to listen to what they think and to do the things necessary. If you know any of the story of George Barber and this track; you know that he is hardly one to scoff and do things his way. Barber wants to create the "Augusta" of motorsports, and that means he is willing to do what it takes to do that including track upgrades & changes.

So assuming the track changes needed can be made; what is the final hang up? When would a race at Barber be possible in the schedule. Being very involved in my past employments in making annual event/practice/promotion schedules; I like dabbling in this.

So being from the south I can tell you that roughly most of June-August are off the books unless you want to cook all the spectators. Early September is possible but you want to avoid college football (which starts September 5th for Alabama & Auburn). So at this point you might want to eliminate the fall as at least the best option for Barber, though still totally possible.

What does that leave you with; April essentially as March is too much of a weather gamble. so looking at the current schedule and assuming the IRL wants to use that as a starting point:

We can generally come up with 4 ideas (which all depend on a couple factors for sure).

1 - Move St. Petersburg forward into March and let Barber take over the 1st weekend of April. (this is of course contingent on St. Pete's willingness).

Doable? Definitely depending on willingness, AND it would then get the IRL starting date sooner like it used to, and should be.

2 - Put Barber on the week between St. Pete and Long Beach. This could be an OK time for the race, but this assumes that the IRL doesn't want to get an oval back to the front of the schedule, it also turns the opening of the season into 4 consecutive weeks going right into Indianapolis...

Doable? sure, but in 1 & 2 both, do they really want to start with 3 straight road/street courses?

3 - Put Barber behind Kansas and as the lead-in to Indy. I honestly like this option best personally, but is it workable with days off and Indianapolis events?

Doable? This year BMP would fall on May 2nd or 3rd and then still leaves 3 weeks for Indy practice and qualifying; but not opening day on a weekend. However with opening day being only ROI, I don't see it as a huge deal, but does it conflict with Indy's Mini Marathon? Generally because Barber is a road course, it shouldn't put a huge strain on teams who would then be heading to Indy for the Month of May and it would still leave the break in the beginning of the season.

4 - Go into the fall anyway and risk competing with College football. There are plenty dates as options here; and in all honesty it could totally work; I mean it doesn't seem to affect most NASCAR weekends to conflict, and most NCAA football is just warm-up games at that point in their seasons anyway... but that's also some of the beauty of fall, they can simply have the race on Sunday to non-conflict, but practice-qualification attendance could take a hit, but would it really? Keep in mind that Barber pulled 10,000 people out for practice on a day that already had March Madness and a NASCAR race.


Personally I think Homestead or some warm weather oval needs to find its way to the opening weekend of the season; because a series built on diversity needs to flaunt that diversity as an opening act; Doing that will also move the series start forward like so many seem to want, and could move St. Pete & open the possibility for Barber to take their date there. But with Homestead's crummy history of sales in March, and with Phoenix and Fontana seemingly non-options... who would do it?

What do you think?
Posted by Allen Wedge at 1:46 PM