Boy this economy... wait is that 28 cars in the Indy Lights Series!? 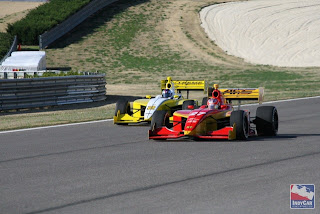 While we were originally waiting on the official entry lists that aren't out yet for the IndyCar or Indy Lights opening weekend; we've gotten great word from both Bryan Herta Autosport & Davey Hamilton (on the Trackside radio show) that there will be 28 cars at St. Petersburg for the Indy Lights Series!

Yes 28! And yes St. Petersburg! Sure you could understand a big jump if this were the Freedom 100; but man, we're talking about the same series that once struggled to field a whole 12 cars in competition just 6 years ago.

In the past day we've just learned that Wade Cunningham will be back meaning that Sam Schmidt will be fielding 4 cars; past champ Jay Howard is in there, past championship team Panther Racing is fielding 2; some popular upstarts Charlie Kimball, Jonathan Summerton, J.R. Hildebrand; new owners Hamilton & Herta, and all of these drivers are coming from just about every racing background & nationality you can get.

Not to mention with a bigger pool of sponsors, thats likely to be 28 pretty sweet looking paint schemes!

These guys and gals will be getting a much deserved hour worth of coverage on VERSUS; but for those of you like me who can't wait for those rebroadcasts; don't miss the indycar.com live broadcasts.

And for those interested in hearding the brit-pop-girl Pippa Mann talk about her road to the Lights Series (and how some still feel a female still can't make it up the ranks in Europe) take in this great interview. 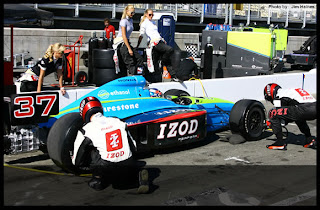 So back in September we reported on how excited we were to have a new great activated sponsor for IndyCar in that of IZOD; and even more so excited that for some new good looking IndyCar apparel; I mean something not resembling WWE would be nice but to actually have designer apparel was more than enough.

As you can see more in depth over at MyNameisIRL, including a video of an upcoming 30 second spot, IZOD isn;t kidding about their activation. Now some might be critical that IZOD doesn't want to sponsor a car, but I am on IZOD's side here; this is much more what the league needs than just another car sponsor. IZOD's entire focus is away from typical race fans, and that means new faces will be discovering the series and wearing the logo who might not normally be doing it. I can't even tell you how excited Mrs. Wedge is that there will exist "good looking options for females". 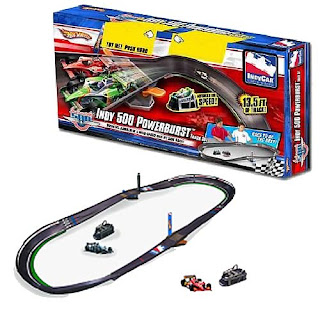 In addition to IZOD's activation, we finally get further word and confirmation that the Hot Wheels partnership rumored last fall has been signed, planned and will be moving forward starting next week. Hot Wheels will be rolling out "matchbox" cars, remote control cars, chipped audio cars, and my personal favorite, slot racers.

This, much like IZOD, is MUCH needed marketing and exposure to an otherwise untouched (by IndyCar) market. Its good to know that my friends and nephews may start seeing IndyCar in public without my assistance.

Talk of pace car art/sponsorship may be in the future as well. I also find it interesting that Wal-Mart is one of the guaranteed wholesalers of replica IndyCars with Target on their side... You can also add Orbitz to the list of official sponsors of the series alongside Coca-Cola, DB Schenker & National Guard!

St. Pete is only a few days away folks, we know many out there are going to do season previews and such; and we'll be doing one too but of a different sort; we're going to be looking at the cars' themselves; what can we expect to 'see'?
Posted by Allen Wedge at 9:47 PM