For those of you who may not know about the incident; tonight/last night (depending on your time zone); in the World Baseball Classic the Netherlands faced the U.S.A. in an elimination game of the quarterfinals. The game is/was thought to be a big miss-match with the USA roster full of big name Major Leaguers, while the Netherlands is full of a lot of amateurs & some low level minor league prospects. 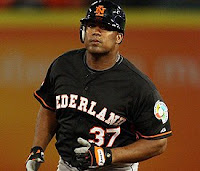 To the point in the top of the 8th inning, the USA pretty much controlled the game and had a very comfortable 8-1 lead. Then Bryan Engelhardt, a complete unknown amateur outfielder from the Corendon Kinheim team of the Netherlands KNBSB league, hit a solo-homerun off USA reliever Matt Lindstrom.

I found myself thinking; "wow that's nice, Netherlands may have their Cinderella run ended tonight, but at least that guy gets to go home with the memory of hitting a home run off a Major League closer known to hit 100+mph regularly". 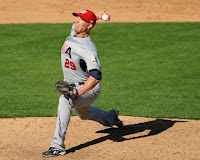 Then for whatever stupid reason out of nowhere, Matt Lindstrom throws his next pitch (clocked at 98mph) at the next Netherlands' batter, Vince Rooi. As any sane person would do the entire Dutch team and coaches came up to the top of their dugouts and started yelling essentially WTF and many other things?

Then viewers were subjected to the complete stupidity of the ESPN announcers trying to tell us, the viewers, why it is ok to throw a baseball at 90+ mph at a batter when you are already up by 6 runs; because the guy before him may, or may not, have spent too much time watching his home run.

Now for those who didn't see it; yes, Engelhardt did not go right into a sprint right after swinging contact, but nothing in a taunting/gloating manner; more in a "wow that was awesome" manner. The reason they only show the replay of it in slow-motion, is because that is the only way they can make it look like he did anything they claim. When played in regular time you will see no standing around, he did not point or say anything to any member of the USA team; he did absolutely nothing to taunt USA or disrespect the team in any way. It was simply a matter of an amateur enjoying what may be his only moment of glory in his entire baseball career.

I don't care that, as the announcers said, "Lindstrom didn't actually hit him", and that "he could have hit him if he wanted." Or that "he should know to not watch his home run", in fact in the 5 or so replays shown, anyone would fail to see where he did anything disrespectful, he in fact, barely stood at all, maybe less than a second. Never mind you that to this point in the game we'd already seen Jimmy Rollins dancing in the USA dugout, Adam Dunn stand a whole hell of a lot longer when he hit a home run, or the fact that the game was basically already over.... 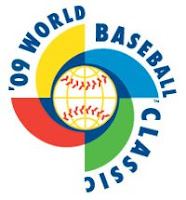 Here's the point where Lindstrom and the US announcers are total idiots: the World Baseball Classic exists to spread the game of baseball and the love of international competition. The Netherlands to this point are known to be major underdog amateurs, but have gotten a lot of notice and respect back in their home country for upsetting the Dominican Republic.

There are probably many new or prospective fans of baseball in the Netherlands watching baseball for the first time; and they were not only subjected to some idiot American throwing a baseball at one of their countrymen, they then have to listen to jackass announcers tell you why its OK to throw a baseball at 100mph at a guy; and why players should not enjoy the sport of baseball if they are losing.

Following the dust-up, the Dutch team continued hitting off Lindstrom, scoring another run in the process, without taunting or posturing. Then suddenly after one of the hits, Lindstrom needed a trainer and, oh no, he was now "hurt" cause clearly no amateur should hit off his awesomeness. Then in the bottom of the inning the new Dutch pitcher threw his first and every pitch in the strike zone.

In those few moments the Dutch team showed more class than Lindstrom or the announcers did all night. And as a citizen & supporter of the USA team, I find Lindstrom's in-game actions & his official comment on the whole matter: "it is what it is", embarrassing & hope his "injury" keeps him from further competing in the WBC.


Pictures via worldbaseballclassic.com
Posted by Allen Wedge at 10:57 PM

I am confused.....first the world baseball whatever is a waste of time and the only people seemingly interested are MLB and those outside of the USA/Canda, but also why do you not seem to get that in baseball pitchers some times throw at hitters after a home run. This happens fairly frequently and is part of the game. It use to be much worse in the 50's and 60's. If you don't like it that is fine. Find another sport to watch or only watch baseball that is played for fun and leave the competitive stuff to the real fans.

I didn't see this game or this incident so I can only base my opinion off of what I've just read. Based off of that information, I think I have to agree with SandWedge. Listen, I'm all for pitchers throwing at batters. With the way everything we have come to know becomes more and more watered down, baseball and some of it's unwritten rules are a link to our (more competive and less wussified) past. However, I think throwing at a batter late in an elimination game that has, for all intents and purposes, already been decided, during an olympic type "spirit of the game" event was unnecessary. You may not like the WBC (I have yet to come to a full conclusion), but you can't deny that the Netherlands have been the feel good story of this tournament and a situation like this make us "braggart" Americans look the part that so many others countries have us pegged for.

Unfortunately, wussification and political correctedness are overtaking this country to soften the way we are looked at in the rest of the world. Do I like it? No, but that's the way things are going, and this instance probably leaves a bad taste in some fans' mouths. I'm realizing now I've probably over analyzed this thing, but the fact remains that I still think Lindstrom could've done without throwing at the next batter. I would have much rather him strike the next guy out and then shoot a quick stare at the Netherlands dugout. Sure, it would've been cocky, but to "new" fans, it would've been less dramatic than an American pitcher "trying to hit" a Dutch player.

ok Mr. Anonymous; so you admit over millions of people watch and care about the WBC yet it's pointless at the same time?? Make up your mind.

I get the concept of brushing back hitters, its exactly the same thing as fighting in hockey, an accepted but a largely unnecessary tactic; however when you are brushing back a guy for a homerun, you generally brush back the guy who hit it, not some random other guy on the team.

What Lindstrom did, was to a team of amateurs who don't need brushing back to begin with (to that point they scored 3 whole earned runs in the entire WBC); the fact that he did it when his team was already well ahead and had the game in hand, and then mysteriously had an "injury" when they continued to hit off him shows you that it was all just immaturity.

I'm glad you wrote this. That was uncalled for. You're talking about an "unwritten rule" that MIGHT have been violated when the batter admired the hit too long. Just because pitchers have traditionally met poor sportsmanship with worse sportsmanship (and man, it was much worse in the 50's and 60's - who cares...people also bought bomb shelters to bury in their yards back then and thought smoking was healthy), does not mean that some guy who has never played in the MLB system did something so offensive in a blowout game that a DIFFERENT guy playing on the same national all-star team (the Dutch all-star team) deserved to get 90 mph heat at his rear.

I love baseball. I hate when pitchers throw at batters. It is not part of the game. Strikes, balls, walks, homers, etc. Those are "part of the game." This was absurd and shows just how small of a man Matt Lindstrom (and the previous poster) is. The manliest way to respond to the uncalled for showmanship? Get your team through the rest of the inning without allowing another blast.

I see your point, but I still think without hitting Engelhardt its less of an issue here. He didn't throw at a head like some pitchers are known to do; at worst that ball hits him in his ass.

The announcers; and Lindstrom's subsequent "injury" are a different story. besides Dutch got their revenge in clobbering the rest of his pitching.

After now seeing the video, the "pause" at the plate is completely understandable. The batter didn't seem to be admiring the home run, but waiting to see if the ball would remain fair or foul. I think what ticked Lindstrom off was the batter's "hop" when he did leave the batter's box. I don't know if that makes a difference to anyone or not, but that's my take after watching it.

This is like fighting in hockey. We're not going to get anything accomplished in a blog by arguing whether or not it "belongs" in the sport, because people are already on one side or the other. So whatever...

My opinion is that it happens and it doesn't bother me when it does, particularly if/when it is deserved. But I do not think an exhibition game is the place for it, primarily because MLB owners will be looking for every possible reason to make players decline invitations. We don't need any more injuries in this WBC to give owners more of a reason to oppose the event.

Furthermore, I think you have to at least earn the right to be obnoxious. If this were Oswalt, Zambrano, or some other seasoned vet (or at least someone I'd heard of before last season) then maybe I could let it slide and see it as getting caught up in the moment, being a fierce competitor.

This, however, struck me as a little boy trying to prove he can play "big boy" baseball... and getting hurt trying!

Take it easy, Tiger. It's an exhibition!

I agree that the replay didn't look like Engelhardt was show-boating. You assume that Lindstrom threw the next pitch because of said show-boating. If you didn't see show-boating, then maybe Lindstrom didn't either, so by your own logic, Lindstrom probably had some other reason for throwing that awful pitch...like maybe legitimate soreness, injured rotator cuff, etc. Lindstrom has a history of pitching-control issues and a non-history of temper control issues. Give the guy a break.

Gaddio, the only problem with your theory is that Lindstrom admitted he threw at Rooi on purpose after the game.