OK, so I've had a chance to really look at the brackets and I have a few notes:

- Wow, how LSU fell! I predicted a 4-seed just a couple of weeks ago. Then they lose 3 of their last 4 and end up an 8-seed. I think the SEC is a little underrated this year and deserves more respect. I think a 6 or 7 seed was much more apporpriate.

- Speaking of LSU, I commented to friends last week that I was watching Butler play and thought LSU could beat them by 20. Now we'll get to find out in Round One! 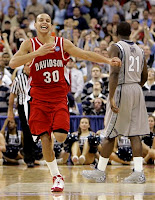 - I'll go ahead and join everyone else by saying: "St. Mary's got ripped off." I watched a few of their games and really thought they had a chance to make some noise. But...

- I'm tired of these "bubble teams" crying. Were you REALLY going to win this tournament? No. So what's the big deal? 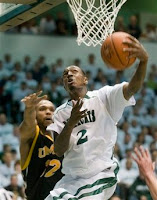 - My Final Four: Lousiville, UConn, Duke, Syracuse. I now apologize to all four of those teams for guaranteeing they will not be alive by Monday. For what it's worth, I have Duke beating UConn to win it.