Nothing Like Some World Baseball Classic at 4:30 in the Morning 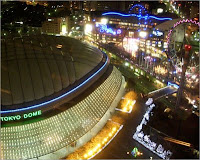 Well I don't imagine there are too many FW regulars up at 5 a.m. ET, but thats no reason to stay away from some good ole live-blogging. I'm pretty tired but I'll definitely cover this so long as I can. Today's matchup features Chinese Taipei(Taiwan) vs. tourney favorites and 2008 Olympic Gold Medal winners Korea for Pool A in the Tokyo Dome, Japan. The winner gets Japan while the loser plays a mst win again China.

For the average fan, Taipei sports 9 Major Leaguers (MLB) and 1 Nippon Leaguer (Japan's Pro League); Korea for being such a stout lineup and Gold Medal winners actually only features 1 each from Nippon and MLB. This should be the first sign to the "America has nothing to prove" apologists that U.S.A. certainly has competition outside our top level league.

4:50 - Korea gets their first runner on, and you've already got what makes the WBC so great. These fans have lost their minds, it is so very loud in that stadium; you'd think they were playing in Korea.

4:52 - And this is why Major League Baseball teams are total idiots as we just learned that Korea had to promise the Cleveland Indians that they would only use Shin-Soo Choo as a Designated Hitter. I've seen the stats from actual studies; players are no more prone to injury in WBC than in Spring Training; in fact players are actually more prone to injuries in spring training because they have a tendency to try and ease up when they shouldn't be. 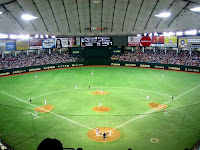 4:55 - Chen Lee is off to a horrible start walking two and hitting another to load the bases. Looking at his reaction he's definition got some big game jitters going.

4:56 - And just like that Korea is up 2-0 on a great grounder splitting shortstop and 3rd.

4:59 - And Chen walks another, loaded again. I know its the first inning but you gotta wonder how long the coach will leave him in before they realize these jitters aren't going away.

And the announcers (not sure who they are) agree; then one of them tries to explain the pitch count rules, I think he was a tad off telling us pitchers have a "70 inning limit".

5:03 - Beautiful swing from Ji Lee who takes Chen deep for the first Grand Slam of of the 2009 WBC

5:04 - and as expected Chen is coming out for Taipei. Kai-Wen Cheng (a college player in Taipei comes in for early relief work)

5:09 - Boy Chinese Taipei needed that. Ki Hyuk Park hits a bomb that's kept in the park by the tall fences. Most likely because he thought it was gone, he ends up getting thrown out at 2nd. A ground out follows, and hopefully the damage is done for Taipei. 8 innings to work the bats.

5:29 - Taipei likely JUST missed out on getting 2 runs back with a ball barely an inch off the foul line that headed into the corner; following it up with a strikeout and double play.

5:40 - not too much worth mentioning in past 10 minutes, pitchers seem to have settled down and now we're just working pitch counts and some routine grounders and pop-flys.

5:46 - And Korea's Hyunjin Ryu is coming out after allowing only his first hit; this is most likely Korea saving him from hitting the 50 pitch mark that would give him a mandatory 4 day rest (and take him out as a bullpen possibility for the rest of round 1). Korea brings in Jung Bong who plays for the LG Twins of Korea.

5:49 - Bong immediately cleans up Ryu's one hit with a brilliant pick-off move to first base using a side/under arm throw without moving his body much. Which immediately comes back to hurt Taipei as the very next hitter puts a ball right up the middle which again likely could have scored or at least moved the runner to 3rd, then Taipei hits right into a routine double play, this game may be over sooner than later at this rate. 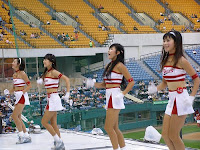 6:01 - man I think I'd rather play for the LG Twins than the Minnesota Twins. They play outside, so no Metrodome roof to deal with, they have real grass, no small dirt piles within turf, and did I mention the miniskirt cheerleaders! (NOTE: apparently at one time Nicky Hilton visited the LG Twins to plug her fashion line; and when you google LG Twins she takes up 99% of the results so watch out. )

6:03 - Random other thought. Is there really anyone who doesn't have a fashion line at this point; like really is there anyone you could find out had a fashion line and it would surprise you?

6:07 - You think Japan doesn't take the WBC seriously; because they just showed 3-4 of Japan's players including Daisuke Matsuzaka and a coach in a booth scouting the 2 teams, most likely their continuing rivalry with Korea.

6:15 - Chinese Taipei starting to show a little bit of wear on a foul pop up well within the 1st basemen's reach, he really make no effort to reach/dive/slide. This is followed by a single that the 2nd basemen dives and stops but not enough to make a play; Korea brings another run in to go up 7-0. And so much for my earlier hopes for getting back to some sleep quickly as the very fast pace of this game has certainly changed and we're still seeming stuck in the 5th inning with bases loaded again for Korea and only 1 out.

6:20 - Oh but Chinese Taipei turns a great 6, 4, 3 double play to get out of the inning. That was the energy they needed a little earlier in this inning to stop that run.

6:31 - Korea's really looking good and crisp. Shortstop Ki Hyuk Park made a great running crossbody throw to get the first out, and then get in a little trouble with a nice base hit to left, but then follow it right up with a great looking double-play.

6:35 - Ok new rule for WBC. We should have the option to switch over to the national teams announcers in whatever language that is. Not that these guys are horrible, but clearly they are a little bored here and there and making waaay too many references to MLB and players who aren't playing when neither of these teams sport any big MLB players. Plus they sound tired, which would be cool if it were 6:35am, and they were doing this with a telecast, but these dudes are at the game.

6:39 - Wow, who knew Korea had these long-ball skills, with a 2 run no-doubter from likely the smallest guy on their team: Keun-Woo Jeong who plays for the Korean League SK Wyverns. Korea now up 9-0 going into the Top of the 7th.

6:49 - If I could throw a pie at whoever this "former player-announcer" is, I would. I'm sure he's a nice guy, but man is he annoying in the booth.

6:54 - Dae Ho Lee tries to end this game for us by again showcasing Korea's long-ball skills; unfortunately he chose the longest part of the field in deep left-center so it only turns into a double. Taipei follows with a walk setting up the double play.

6:58 - ok Korea gets a fielder's choice for the 2nd out, but that puts runners on 2nd and 3rd, all we need is a single now. NOOO, and a good running forward catch from Taipei sends us to an 8th inning.

7:04 - This "former player-announcer" is in love with Reggie Jackson, I think he's mentioned him maybe 12 times in this broadcast, and all 12 of them were unnecessary; like not even good Reggie Jackson trivia/metaphors. 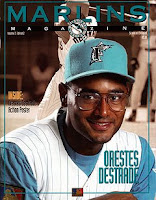 7:11 - Thanks to them finally putting it on screen I was able to learn that the former-player-announcer is Orestes Destrade. Ok I get it, he played 5 seasons for the Seibu Lions.... over 12 years ago! That doesn't make him an expert on any of the 4 teams in Pool A, so why not just pick any of the regular color guys at ESPN's disposal? As I type this Destrede is bragging about some sign he "claims" he hit in the Tokyo Dome. The sign is way the hell up in the outfield bleachers.

7:16 - ok via Destrede's wikipedia page I learned he is a broadcasting/announcing regular for the past 2-3 years... so maybe he's normally better than this and he's just using us because he knows its 4:30-7a.m. back in the states where he's being broadcast.

7:27 - One of the oddest hits you'll see. Taipei's batter steps out of the box a little too late to get the time out call, so hurries back in stabs the bat at the ball and gets a nice bloop single to the short outfield. Taipei has 2 runners on, the beginning of said greatest WBC comeback ever???

7:31 - Nope! Korea takes a double play and a strikeout to end their 9-0 win. Now they get some sleep and face Japan with Daisuke Matsuzaka on the mound in the morning. Taipei will play China first in a win-or-go-home game at 10:30pm ET. until then....
Posted by Allen Wedge at 4:27 AM

awesome. i didn't know you were doing this. good job.

I didn't know I was going to do it either; just found myself awake and figured what the heck; give the people what they want.... a live blog about a predicted overmatch game of teams containing players most (all) of our readers have never heard of.