Quote of the Day as Motorsports Joins the Internets

Your Quote of the Day comes courtesy of veteran IndyCar race engineer Michael Cannon in a report from IndyCar Series testing at Homestead:

"The pit lane wags wasted no time in nicknaming the trio of NHL cars. We have the “Mickey D” car, the “Bobby D” car and, of course, the “Double D” car. I’ll leave it to you to work out who’s who."

Priceless, hehe. One great thing about the 2009 racing season so far is that it looks like a lot of racing associated people are embracing the internet and all it has to offer, here are a few other bonus items to look out for that will give you insight, laughs, better understanding and more:

- As from above, Michael Cannon's notes from Homestead testing. 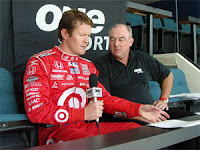 - New Zealand's motorsports coverage channel, ONE Sport, decided to send a team of cameraman, producer, and commentator Bob McMurray down for Homestead to get some in-depth coverage of IndyCar preseason; but better yet they kept a journal of the entire trip including crazy airline passengers, alligators & vultures.

- Vision Racing is giving great news, tidbits, and photos through Twitter & Facebook including most recently pictures from a Sports Illustrated for Kids issue covering the up and coming Ed Carpenter!

- Stanton Barrett (through his sponsor Interush) has a great blog. A lot of people might dismiss Stanton for whatever reason, but this journal gives you a good idea of what he is really putting himself through being a stuntman racing in stock cars and now introducing himself to IndyCar as a complete rookie to open-wheel cars. The real gold to his blog I find however is that he has already taken and linked to over 30 high-resolution photos taken from testing so far. Some really amazing shots, I can only hope he continues to do this during the season. I'd also love to repeat that I think that paint scheme/livery is already head and shoulders the best in ICS this year.

- The home of E.J. Viso, HVM Racing also have a twitter they update fiarly regularly. In fact while we're at it here are some other official twitter accounts: Indianapolis Motor Speedway / IndyCar Series and drivers Juan Pablo Montoya & Max Papis. JPM hasn't tweet'ed in a while but Max is an update machine; and finally the guys and gal down at the SpeedFreaks radio show frequent twitter and use it also to get fan opinions to use for the show.

- James over at 16th and Georgetown found this great video/news report about Robert Doornbos explaining the nickname "Bobby D." and also taking a small coupe for a thrilling ride through the Netherlands. Unfortunately its all in Dutch so good luck on fully understanding what's going on:


Do you know of any other official racing extras from teams, series, drivers etc. Let me know and I'll add it to the list here.

UPDATE: Check out the twitters Patrick at TooMuchRacing commented for us.

Also you can now check out a pre-season wrap up from Tony Kanaan that includes everything from testing, to go-karts, to his son Leo, to ugly Formula 1 cars, to the new IRL specs. And while he hasn't updated since last winter, I imagine Tony will still be writing in his own blog as well.

Pictures by: interushracing.com, ONE Sport & Yardbarker
Posted by Allen Wedge at 11:48 AM

That was a great piece by Michael Cannon - I must remember to check back often for more from him. I also loved the NZ journal, hilarious!

How broad do you want your Twitter links? IndyCar-only or other stuff? You know me by now, I can't stick to one series in a post. In addition to those listed, I've got:

Thanks Patrick; that's just the kind of thing I was looking for.

The most startling thing about Stanton Barrett's blog is finding out JUST how much of a rookie he really is to open wheel from just those 2 days of testing, yet he's still come around faster than others in his situation.

Of course to any readers, there are tons of twitters out there for many bloggers too.

At least he's taking a methodical approach to it, and improving his car setup and performance. That's a good sign. Great pics too.