Some Important Changes for Taking the WBC Forward 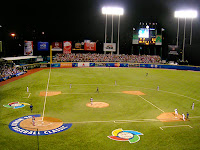 Now that we know our final four semifinal countries headed to Los Angeles to claim the title of World Champion; I'm sure the teams will be truly pumped to finally see no more pointless games.

I will be the first to admit; going to the double elimination format to figure out the 2 teams advancing from each pool is a great one. The Round Robin tiebreaker format of 2006 was nothing but a ridiculous mess. That said before we head into the finals of 2009, I'd like to offer up some suggestions for the 2012 World Baseball Classic.

I say get rid of the pointless game, give the 2-0 team the #1 seed and let them play an exhibition game to stay warm.

#2 Stop forcing teams to repeatedly play each other round after round. They had this problem back in 2006 too; but in 2009 alone; Korea and Japan will have played each other 4 times with a possible 5th game if they both reach the final. Venezuela and the USA have matched up 3 times with the possibility of a fourth. Also Cuba and Mexico played each other in consecutive rounds, and in their case it was for elimination in the 2nd round.

This solution is very simple. Do the same thing the FIFA World Cup & Olympics do. After the first round, send a Pool's two qualifying teams to different pools (sides of the bracket) in the next round. It is unfair to Korea and Japan to have been forced to play each other 4 times when clearly they may be 2 of the best teams in the tournament this year.

#3 Make the WBC a qualification tournament instead of by invitation & open it up to more than 16 teams. The biggest problem with a World competition, is one that doesn't let everyone in the world compete. I know it was based on many factors on who they chose, but the WBC should NOT be by invitation only.

Columbia's #1 national sport is baseball, yet they were not invited to even compete. The same can be said for many countries who should at least be given the shot. If they are going to stick with a 16 team tournament then at least make it a qualifying tournament like the World Cup and Olympics. If you can however, I'd just add more teams. There is no reason this tournament can't make it 24 teams... 32 may be a stretch right now, but 24 should be totally doable.

#4 Continue finding new venues. It was great to see the first round visit Canada, even if the Skydome's field was in pretty crappy condition. But I'd love to see Italy, Netherlands, Korea, and especially Australia get a visit (weather permitting of course in all those places). There are more Caribbean islands than just Puerto Rico, give them a 1st round pool, they surely deserve it. The best way to get more countries excited about the WBC is to include them in it, not continue to make them fly all the way over here just to compete; its give the tournament a more worldwide feeling to it.

Now people want to talk about how its in the wrong time of the country, or that no one cares, even though clearly people around the world do... I'll just say this. Unless MLB were willing to take a break mid-season like the NHL does during the Olympics; March is the best time we'll ever get. Japan, Korea, Cuba and others have been playing year round and practicing since November; there's no reason Americans can't play some winter ball to be ready for it too.

I could throw in little tidbits like: Don't play at the Skydome unless they get better turf and full dirt; or stop giving USA stadiums all the semifinal and final round games but those are minor in comparison.

So World Baseball Classic do those 4 things and the your WBC can continue to build itself up as a legitimately good and the potentially great competition it can be.
Posted by Allen Wedge at 12:10 PM