Some Perspective on Upsets

Man I love the World Baseball Classic! (I'd love it more if they fixed the 2nd round brackets but that is a story for later in the week). 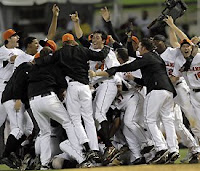 If anybody wants to claim no one cares about this tournament, just watch video highlights of the celebrating, anguish, and postgame interviews from these games; heck the Netherlands were celebrating for almost 20 minutes on the field after the game was over (and that was just for beating the Dominican Republic and getting to the 2nd round). While the WBC only has 16 countries participating; its starting to get some of that familiar feel and energy of the FIFA World Cup.

Even more of a World Cup type feel, Dominican Republic media are already calling this a national embarrassment and have already forced the resignation of the teams president.

So just how big were the Netherlands over Dominican Republic upsets? Here are some fun facts:

Dom. Rep. has 23 Major Leaguers reading like a list of who's who in baseball while the Netherlands has 2 Major Leaguers and a load of guys from their own league or MLB minors; with DR's team making a collective $83 million to Netherlands $400K in salaries. Best said by Netherlands coach Rod Delmonico: "I don't have big names, but I've got some long names"

In the game last night, Dominican starter Ubaldo Jimenez set a WBC record with 10 strikeouts in 4 innings (he faced 13!)

Jiminez was relieved by Pedro Martinez, Tony Pena, Rafael Perez and Damaso Marte who threw 6 scoreless innings of relief allowing only 1 hit. In all the Dominican Republic pitching staff threw for 15 strikeouts, only 1 walk and 5 hits... and lost!

After managing only 3 hits over 10 innings, the Netherlands found themselves down 1-0 in the bottom of the 11th, and found a way to get hits when they absolutely had to have them.

So what does this all come down to? The Netherlands pitching so far has only given up only 4 earned runs in 3 games; I'm sure the Dutch fans would love to see some more runs scored, but when your pitching staff is keeping the best hitters in the world in check, it most definitely helps.

I wonder how long it takes for an MLB club to snag up Netherlands pitching coach Burt Blyleven?

UPDATE: for those interested, Dutch pitcher Leon Boyd is keeping a blog of his WBC experience here.
Posted by Allen Wedge at 2:08 AM

It's a shame that game was not on television. It was exciting just keeping up with your updates on twitter.