VERSUS Boldly Going Where IndyCar Has Never Gone Before

We've said here before that we think the IndyCar Series moving the majority of its races over to VERSUS was a good idea. We'll say it again if asked; but now in addition to everything else that VERSUS has announced/done, we can add that starting March 7th VERSUS will be advertising their upcoming IndyCar Series broadcasts abroad:

"not only seen on Versus, but across Comcast channels, and in print, on billboards and possibly even in movie theaters."

Stop me if you've heard us say this before; but this is just another step VERSUS is taking to promote the series that ESPN not only hasn't done in recent history, but by my memory's account, never attempted. Shoot if anything, ESPN should be thankful because ABC/ESPN still has 5 races that can benefit from the additional promotion. Indy Racing League's John Griffin gives us the understatement of the year:

“There’s no comparison to this campaign that we’ve ever seen before. We’ve never had this sort of commitment in our history … especially in terms of what Versus is going to do off-channel.”

I know a lot of people (writers, bloggers, forum-debaters etc.) want to complain & point out a lot of negatives to VERSUS: less viewers, harder to find on TV, and of course the currently outdated IndyCar page on their own website. I will concede that all 3 of those things exist, but are all there to be improved on, they are not lost causes as the recent ESPN treatment had become. Ask your local bar to put races on, tell your cable company you want the channel, I've seen it and many other channels get added to my coverage in multiple locations with multiple carriers and e-mail VERSUS that you want content on the page, but don't just openly whine.

At this point it has to be clear that VERSUS means business; this is no gimmick for them as most found Champ Car on Spike to be; or red-headed stepchild: tape delayed/time shortened/moved from channel-to-channel treatment that ESPN/ABC consistently gave year-in/year-out. I know exactly where and when each race will be, and I know that they will be there for the next 10 years.

I definitely disagree with the Indy Biz Journals' Anthony Schoettle that VERSUS is "still idling in the pits." We watch a good spectrum of sports here at FW, and I consistently see the IndyCar teaser commercials on VERSUS since January, during all of their programming including top events: NHL, WEC, Tour of California, PBR, & maybe 5-6 times alone during the live 2-hour Contender finale. On top of that, the season is still a month away, starting their bigger wide-spread advertising along with the start of their pre-season shows makes perfect sense.

So I would just say to any people wanting to complain; this is not the time for complaining. I think this is at least time to wait and see what can grow but moreover, time for constructive & positive suggestions for VERSUS; and as such I'll start. Should VERSUS take note of any of us:

1) Take pre-race/qualification/preview coverage out of the press booth! Give us some pre-race analysis among the fans among the race 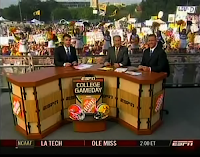 -attendees (a la College-Game Day). Before the race let fans listen in, cheer & boo whatever you say; let them hold up their signs of "hi mom" or "go Dixon" and hope they get on TV. Pre-race conversations up in a nice, quiet, secluded booth can get boring; PLUS having fans immediate reaction helps announcers gauge the reaction to what they are talking about and can help avoid boring subjects or continuation of bad jokes/boring banter.

2) Along with the above: Taking it outside will also help viewers understand what a great atmosphere races are and encourage people to buy tickets and go to races. On that same note; get some pre-race coverage with fans, or pre-record drivers interviewing/interacting with fans during practice that can be played at any time. Most of us know drivers on the whole are an incredibly nice and outgoing group. Showing drivers' fun sides are great to begin with; showing drivers having fun with fans is that times 10.

3) I'm assuming VERSUS does not intend to keep their IndyCar page abandoned; my advice is simple; do to that web-page exactly what you've done to the WEC page. post race interviews, video clips, and then some analysis news articles is per 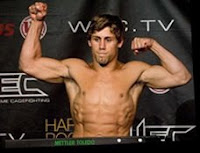 fectly what the IndyCar page needs and no more for a start; and it should be easy to accomplish.

4) Cross-promotion. WEC, PBR & IndyCar specifically have things in common; they all travel for each event, all have incredibly in-shape athletes, all rely heavily on its participants as the face of the sport. This is simple; have Urijah Faber & Miguel Angel Torres or any fighters/riders visit an IndyCar race, maybe even have them ride the 2-seater; have Wheldon, Kanaan etc. attend any of the fights or rodeos; have them visit one of the fighter's or rider's training facilities for a work-out; all will produce video that can be used during any of the sports' broadcasts for great cross-promotion.

5) In-helmet camera for a person on a pit-crew. Change who gets the camera each race (and the team), and by the end of the season viewers should get to see what it is like to do each position on a team plus get some bonus exposure to team sponsors.

7) Get drivers/owners/broadcasters to show up on Sports Soup should something they did end up on the show. The best part of E!'s The Soup is when people show up to make fun of themselves, plus their chance for additional promo.


Any readers, have any positive ideas, changes, recommendations for VERSUS? Say it here, say it anywhere; but do that well before you complain about something that really hasn't even begun yet.

Email ThisBlogThis!Share to TwitterShare to FacebookShare to Pinterest
Labels: indycar, irl, racing, versus

Good thoughts. Versus should study the Speed F1 stuff. They show battles wherever they are on the grid -- two guys fighting for P15 is often more exciting than watching Ferrari lead by a day. Give us the best battles on the track, regardless of position. That's how most people watch a race live.

Nice. I didn't even think about the whole being out with the people idea. That's a great one.

I've been keeping tabs on the BBC F1 announcements here in the UK. I think Versus needs to pick up on one thing they've done: blogs.

The presenter, analyst, pit reporter/s (not necessarily the commentator). Give them free reign - within reason. This needs to be on the Versus site not the IndyCar site, to remain separate and objective.

The pit reporter and booth analyst can expand on themes they only had time to touch upon during the race. IMO a few of Arute's last year were fluff pieces.
The presenter can talk about the challenge of holding the programme together with so much going on.