Beauty of the Interweb: Driver Trash Talking & Wagering               and the Possibility of Tony Kanaan With an Afro

We here at FW embrace just about most parts of the Internet and especially Web 2.0; through this site itself, but also Twitter, RSS feeds, and of course tracking all our sports and athletes, drivers, writers and more...

And this kind of thing, my friends, is the epitome of what it is all about: drivers trash talking through their online blog/journal/column & now bets! In this case its friends Tony Kanaan and Dario Franchitti, and every bit as entertaining as we start with Tony:

"One of the guys that got by me near the end was my old friend Dario. That guy…

I was at dinner with him the other night, and somebody approached me at the table and asked me for my autograph, and he didn't even recognize him sitting next to me. I said to myself, 'Come on, this guy is Dario Franchitti. The Indianapolis 500 champion, Series champion, and he’s Ashley Judd’s husband.'

So that made me wonder, 'What's wrong with him?' And I’ve figured it out: It's his bloody hair! So my plan is, and I'm going to reveal this here to my readers…I’m going to pull a ‘Jackass’ move on him. I’m going grab my clippers and approach him on the drivers meeting and just go, BAM, right in the middle of his forehead. A big patch of hair, GONE! And then he's going to have to cut it.

Right now he's using a 3X helmet just because of the freaking hair. I'm going to take care of that. It's not going to be with scissors either, because it would take me too long; it's going to be the clipper, the same way I do my hair. I’m going to get him.

You know, even better, I'm going to propose a bet between me and him that we’ll probably switch: The first time he wins a race he has to shave his head, and the first time I win a race I won't cut my hair until I win again." 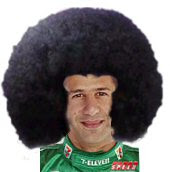 "Finally, I see my little Brazilian friend is talking trash about me in his column. You sure want to make that bet, TK? You’ve heard it here first, I accept. Absolutely. It’s on!

The thing is, you guys have all seen me with a shaved head but you've never seen Tony with his full afro. When Tony lets his hair grow he's got the world's biggest 'fro. A giant disco afro, at that. It’s unreal. Looks like an oversized costume wig. I’m definitely going to go win this one."

I don't know about you guys; but I'm hoping Dario wins this one so we can get some Kannan-Afro. And now with Dario, Kanaan, Justin Wilson AND Will Power all doing journal/columns, plus A.J. Foyt too!! Then add in Hunter-Reay, Mario Moraes, Tomas Scheckter, Vision, HVM, Conquest, Rubicon with Twitter accounts and Stanton Barrett with a blog too; what could possibly be next...?
Posted by Allen Wedge at 12:35 AM