In the past weeks we've certainly fielded news and rumors about possible teams participating in the IndyCar Series. In the past week though, we've gotten 3 more confirmations of Indy 500 "one-off" entries.

#1 Came from IMS Radio Driver/Analyst Davey Hamilton, who confirmed on Mike King's weekly Trackside radio show that he will in fact be participating in his 3rd straight Indy 500 since coming back from his horrific crash. While he didn't name the team, he did assert that his deal is signed and confirmed, and the team will be announcing the deal next weekend at the

IndyCar race in Long Beach. Lets hope whoever it is; has some more artistic touch than his last car with Vision Racing (See above right); and hopefully at least as good as his first one with Vision (see left). 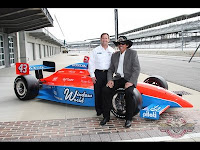 #2 Comes from a guy just as likable as Davey, in that of John Andretti. Andretti will be racing a Richard Petty/Dreyer & Reinbold partnered car. Now whether or not you want to debate how involved Petty really is, is a matter of 'who gives a crap'. John Andretti proved time and again last season that he still has what it takes by contending in the Top 10 on multiple occasions in the not-as-prepared Roth Racing 2nd car. To boot, the car itself looks amazing (even if it doesn't have the traditional STP sponsorship to go along with the day-glo red and Petty-blue.

#3 Very much like the Andretti-Petty entry will bring some great paint-livery-uniqueness in the return of a Patron Tequila sponsored car, with driver Scott Sharp being announced as a 500 teammate for Dan Wheldon. Sharp will still be doing the ALMS race at Miller Motorsports Park (as Briscoe did in 2007) so its good that he's with a Panther than an also ran, because he needs to be qualifying in the 1st weekend. With talk that Scott, Gil De Ferran and Adrian Fernandez are all considering leaving ALMS, or at least expanding their racing orginaztions, to run full time in IndyCar; this announcement just gives creedence to the notion as we are likely watching a testing of the waters.

With the down competition in ALMS and the still randomness of their TV broadcasts being delayed and all over the networks; sponsors like Patron may be looking at the amount of VERSUS ICS coverage and wanting to go where the stability is, while the manufacturers would sure not like to be in 2 series with no manufacturer competition; and if they had to pick one, I'm guessing they'd like to at least be in the one with at minimum 22 cars in competition on the track while the ALMS Prototype classes are fielding a whole 3 per class.

All that said, I'm just curious how the Panther/Patron car will look as E.J. Viso's new ride does somewhat resemble the old #8 Patron car. Plus... this announcement gives us an excuse to attach this video:
Posted by Allen Wedge at 9:27 AM