Notes from Qualifying & Notes to Get you Ready for the 500! 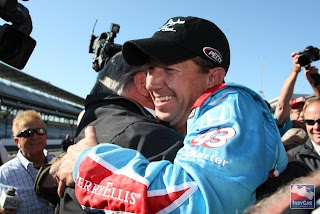 So lets start with the biggest storyline throughout qualifying, one that went through 3 days of qualifying... John Andretti's amazing run into the show. My gosh, have you ever seen such an up/down/up/down/up story in racing as good as this one. Even with the name it is, John is a racer that manages to transcend his famous last name. He's never regularly considered part of the immediate Andretti tree; he has spent time in just about any kind of racecar, winning in all of them at the top level of NHRA, Sportscars, NASCAR & IndyCar! He may actually be the last true driver with talent parity, or at least the guts to truly test himself at all levels of competition.

I've been watching qualifications since I can remember, and I honestly don't think I've seen & heard a crowd reaction as loud as they were for John's final run since the days of track records. The entire front straightway stands were jumping out of their seats, hands up in the air shouting at each lap John put down in that final run, and John was excited and celebrated with them!

Another reason to love John... he tells you what he is really thinking; and while he had many-a-good quote this weekend, I think the best came when someone asked him about being nervous when he was down to his last run and the team made a bunch of changes on the fly; John replied: 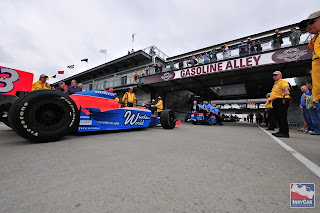 "When there's five minutes to go, who cares if you crash? What are they gonna do, fire you?"

What makes you truly understand how good a guy John is beyond the fans exuberance. We now know Tony Stewart gets Versus, because he texted in advice to Larry Curry (John's strategist) to help John with his running lines to help him qualify! Brant James puts Tony best saying: "You can take the boy out of Indiana ...”

-Which of course takes us to the further end of Bump Day drama with Ryan Hunter-Reay, Alex Tagliani & Bruno Junquiera; among others. Let me start by saying that I am not shocked in the slightest that Conquest Racing has pulled Bruno Junquiera for their primary driver Alex Tagliani. We've seen this happen many times over the history of the 500, most famously in 1992 when Walker Racing pulled Mike Groff for Scott Goodyear who then took the car from 33rd to the closest ever finish in 500 history.

That said, Bruno Junquiera got screwed. He didn't get screwed by the decision to be replaced, he got screwed because Conquest Racing should never have been in that position in the first place. Most people are quick to point out that Conquest pulled Tags out of line, twice! However, the problem starts well before that. And this is where you get a clear picture of difference between the teams who just understand strategy better.

Let's take a look at the timeline:

At the drop of the hat from Philippe's & Duno's qualifications, it was clearly evident that Sunday was much better than the crappy Saturday weather with cars generally pulling 3 more mph! There was sign #1 that Conquest should think about requalifying Tags, but at this moment there were still 5 cars between them and the bump day qualifiers so no urgency.

However 4 hours later, at the exact moment Mike Conway finished his qualification, all the other bump day teams realized something (and at the moment it looked like Conquest did too). IMMEDIATELY after Conway's run, we saw Nelson Philippe, Tomas Scheckter & E.J. Viso back on the track, and even later Tags would run some time will in the 221.5 area.

They all got it. They knew that they needed to forget their position and time from Saturday. If practicing wasn't enough, how Conquest didn't figure it out by Viso's run, and ESPECIALLY by Tomas' run is astounding. Its was made even more astounding by Eric Bachelart's comments after everything had ended, simply saying "we wanted to keep our spot at 26, and we didn't think it would get to us."

But here's the thing, once Tomas Scheckter went out at 5:35, #26 was now open again as the top spot should Tags go out and re-qualify: PLUS we knew from the previous hour's practice Tomas was going to do this. John Andretti's teammates all made it in the field by this point, so there was no reason to think they wouldn't figure it out for John; EJ and Tomas were clearly running qualification simulations out there, they had to have known what was going on right? That is even before all of the pulling out of line silliness; 2 hours of time they threw away cause they figured 26th place was that much better than 27th or 28th on the grid.

You couldn't help but feel your heart ripped watching the distraught Alex Tagliani when Brian Barnhart told him time was up. It seemed pretty clear he put everything in the hands of the team, and it seems as no one on the team had communicated to him just how short their time was, and maybe they didn't even know as evidenced by what transpired. But let it be known that it seems as through we've got 32 of the fastest 36 cars that were at Indianapolis, cause Ryan Hunter-Reay shouldn't be in there has Conquest not procrastinated.

Even Tags was confused by the actions: "We'd run 221.8 around 5 o'clock to protect our position but then we got bumped and had no time to go back out. Right now I'm wondering why we didn't go back out and protect our time and it's very difficult to accept the fact that we're going home."

After hearing and seeing the destroyed Alex Tagliani, we;re glad he's able to get in the field for his first Indy 500, but both he and Bruno should be in.

It also seemed as if HVM Racing did not know that qualifying efforts take roughly 6 minutes a car to do, because they threw their car in line ahead of the likes of Andretti and then RHR at the end even though time did not dictate it possible for Philippe to even be bumped within the time remaining. they got out of line sure, but that's still takes time away from the people who needed the time should it have come down to seconds.

Now I like Ryan Hunter-Reay, and I like Vision; but again they shouldn't be in the field. As a fan of racing, I'd much prefer to have Tags and Bruno both in the field, happy with their cars, than a driver who is clearly frustrated with his situation, and a car they can't improve. They are clearly excited to be in the show as evidenced by their post qualification comments and twittering, but whether planned or not, they got in as a result of circumstance, which may just be the turn of luck they need with the #21.

On the other hand, I can only imagine the kind of bullet the IRL dodged with RHR barely making it in the field versus being bumped. RHR alone has made about 3 separate appearances in New York today in addition to the field ones.

and speaking of Vision's #21; I am already absolutely hating both the IZOD commercial with the ugly as hell car, and the Apex Brazil ad that advertises a website that does not exist. Guys we have over 10 more races to go, I really hope you find time to film more commercials because by the end of the season the fans will be hating you as well.

And now for those getting ready for the race, here's are all kinds of amazing facts/notes for this weeks coming race: 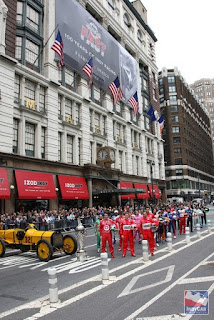 -Closest field ever by time!

-3 drivers who can break the record for youngest winner ever: all 3 of them are starting in the top 3 rows: Marco Andretti, Graham Rahal & Mario Moraes.

-20 of the 33 are past race winners, at either top level of CART/Champ or IndyCar Series.

-Ending Futility for Kanaan: He's never qualified lower than 6th in 7 500s, and he;s lead laps in every 500 he's participated in, but still has yet to lead final lap.

-Famous names: We have a Rahal, a Foyt, and 2 Andrettis.

-Row with most combined letters in drivers' names: Row 1 - 41 letters

-And lastly, cars of all colors and designs: blue, red, white, black, silver, yellow, one is army/camoflague, one is neon yellow! and even one that is bright pink!
Posted by Allen Wedge at 1:25 PM

I have nothing against Ryan Hunter-Reay, either. But I see an egregious conflict of interest when the race track owner/race promoter/race series owner owns and operates a team.
However, it's never taken a race win away from another team and likely never will.

Just to note that Scotland is a part of Britain so that's 5 British.. or if you prefer, 4 English and 1 Scottish. This is a very important distinction!

Agreed on your comments with qualifying, Conquest messed up. But I guess that's just a part of this system, you've got to know it and be ready for it or someone else will take advantage of it.