"I decided to make some big changes to the set-ups because our specially-made stuff for Indy wasn’t worth a damn—it may be good in the future but right here, right now, it was slowing us down.

We went back to the basics and picked up three miles an hour! A little embarrassing but I didn’t care. We tried it first with Vitor’s No. 14 ABC Supply car and we knew right away. He said the car didn’t feel that much different to him driving-wise, it was just faster."

You can't fault the team for trying some new things out, that's what competition and innovation is all about; but you really have to love A.J.'s up front candor about the situation on a public website, as he has been all season!

It also sounds like Vitor's experience is rubbing off on Anthony to at least helping setups, so that's great for Quattro. Surely he'll have a better experience this year than last right?

So in other Indy 500 news, Oriol Servia was officially confirmed, and there's rumors of possibilities of changes and new cars at 3G, Conquest & Dale Coyne, but you could find all that info from many of the great sources like Curt Cavin, MyNameIsIRL, IsItMayYet, 16th and Georgetown, OpenWheelWorld, Pressdog and many more; you should definitely check all those guys and gals out.

Since we also twitter furiously throughout the weeks and track activity, and a lot of other do as well including drivers and teams, I won't bore you catching up this site with all the minute details but will leave with these 3.

#1 - I'm not sure what it does for their speed, and I'm also not sure if this says anything about sponsor possibilities for Ryan Hunter-Reay, but the team let out a picture of the #21... now with day-glo orange on a lot of ends of the still gray body.

#2 - It is absolutely great to see Alex Lloyd picking up great support from all the fans, sponsors, and media; turning the color pink into the new "IT" thing. He;s registered pinklloyd.com, he's gotten write ups in USA Today, and many other avenues, and it now sounds like we have Pink Lloyd/HER merchandise on the way. You have to imagine HER is loving this exposure, and here's hoping this can not only develop into additional races for Alex; but here's also hoping this could be the nudge that gets Sam Schmidt Motorsports into the big leagues after dominating Indy Lights all these years. I can;t think of a better fit with a driver & sponsor for SSM to take the plunge. 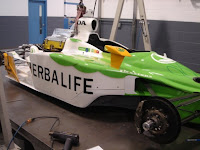 #3 - As we always love to talk aesthetics here at FW, its worth noting that Townsend Bell's car for the Indy 500 is badass, but we would never expect anything less from Townsend and KV Racing, would we?
Posted by Allen Wedge at 10:03 AM

Townsend Bell can be trusted to trash any gorgeous race car. He's not a winner, isn't good at finishing races, drives like a sixteen-year-old who just got his license, and he isn't a sponsor magnet.

You sure we're talking about the same guy? Townsend Bell has 19 ICS starts to his name; was running at the finish for 12. of the other 7, 1 was mechanical, 3 were being collected in other people's accidents.

He has a Top 5 & eight Top 10s; he brought William Rast to his car last year, AND got Jordache for Buddy Rice too, and I believe he brought in Rock & Republic or something a while back...