Formula One Heading for Splitsville, Bittersweet Decisions, College World Series down to 4 and IndyCar's Future & Expansion

Geez, you take a couple days off to catch some breath and you get flooded with news. Firstly, don’t miss out on the Louisiana State-Arkansas (2ET) & Arizona State-Texas (7ET) rematches to decide our NCAA baseball championship match up.

-And speaking of baseball; we think we’ve found the prime definition of bittersweet. We’ve chronicled the final seasons of both the Vermont Catamounts & Northern Iowa in baseball this year; and then Ron, Deuce and I watched our hometown University of New Orleans Privateers lose their coach to a better offer from Wake Forest.

Well then it was good news to learn that UNO’s longtime assistant Bruce Peddie was pegged to take over as the new head coach; but here’s the bitter, Peddie will not be announced as the new coach yet. Why? Apparently UNO is considering ending all sports at the school as a cost-saving measure. This would be a huge shame for a school with a long history in many sports including over 15 NCAA tournament appearances in baseball; we can only hope boosters or someone gets this thing secured.

But all that news pales in comparison to the world of motorsports.

-First a bit of seemingly small news that I’m still not certain how it manages to be overlooked. I’m not saying this has big implications and all but when I hear that Chip Ganassi has hired BOTH Kyle Busch and Scott Speed, I think I’d pay a little more attention. Yes Chip is doing just that, as an extra entry for his Grand Am team at the next race in Daytona. Yes Chip has not stolen them for NASCAR, and no they haven’t said they’re switching series or anything; but the most important implication here; A) Joe Gibbs is lenient enough to allow Kyle to do this. B) Kyle is truly able to back up his assertion that he wants to try other forms of motorsport.

This isn’t like drivers jumping in for the Daytona 24 hour’s all-star type event; this is just another Grand-Am race. Take that for what you want, but if this is the case, how long is it then that we see Kyle do more one-offs of other series that do not have date-conflicts with his NASCAR commitments? I’m glad that in the world of even lesser crossover, there seems to be a new guy willing to try it. 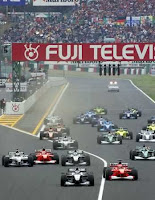 -But now…obviously if you are a racing fan and you’ve been awake & alert, you have heard the news that Formula 1’s teams are planning on splitting and starting their own new series, without nut job leadership and ridiculous rules that they have absolutely no say in. I could tell you all about the similarities this has to the history of IndyCar racing in North America, but the lads at BritsonPole have already done it; and I could go into thoughts and details about what a split may do for Formula 1, how nutty the FIA has to be to not have learned from history, and implications for European/Brazilian/Asian fans; but again, many other people have already done so.

What I will do however is connect the dots to what we spend the majority of our motorsports coverage on here: the IndyCar Series.

-Whatever is happening in Formula 1, will in whatever small/slight way, give IndyCar an added chance to grow, and coincidentally, Chris Estrada found an article out of Richmond, VA pretty much confirming what we all figured was happening with the IndyCar Series going to Brazil. Chris went on to continue a point he made earlier about why he thinks this (international expansion) is all a bad idea. I understand his (and many other’s) thought process about this issue, but I have to disagree; especially in light of the above bigger story.

Overall it’s a yes & no thought on international expansion; India would be a bad idea; China’s not great but understandable with Japan already there, and in my opinion Brazil is a great idea; however one that needs to be tweaked slightly.

Firstly on the difference between what should and shouldn’t be done; I’ll start by saying that the IndyCar Series has something no other series has, and can continue to build. It has diversity, not only in tracks (F1, GP2, A1GP, ALMS, Grand-Am = all road, NASCAR, USAC = 99% oval), but in drivers, teams, backgrounds… the whole lot.

Drivers come from road racing, go-karts, sports cars, dirt tracks, even some from motorbikes, and last I checked, almost 13 or more countries are currently represented. Why then would we want to pretend the rest of the world doesn’t exist? We use a Japanese engine, in an Italian Chassis, using both Brazilian and American fuel; American electronics; truly it is the flavor of world harmony, regardless of what any idiot (and I'm not talking about Chris here) might say about this series NEEDING to be all American. I’m sorry, but the outside world does exist; and people like Shane Rogers & Michelle Beer prove that IndyCar racing spreads further than the borders of the U.S.A.

And with that out of the way, lets talk about profitability & logistics.

-Brazil is in the general same time zone as the U.S.A. populace, meaning no concessions need to be made on the part of fans of Television & internet coverage; especially if it brings in a big sanctioning fee. starting in Brazils early weather also gets the season started earlier, which many fans (myself included) have been harping on the league to do. More importantly Brazil the country presents numerous parallels to American fans; the biggest in that we have, from time to time, 7-10 Brazilian drivers in the 2 IRL leagues. Add that on top of a BIG Brazilian sponsor giving fuel & potential car/team sponsorships when the race comes around, and I think fans easily take on a new Brazilian race(s).

My only problem with the plan in-action for Brazil is that it looks like they intend on starting the season with 2 road courses; and that to me is the bad part of the idea. Like I said above, the one thing IndyCar has that NO ONE else has is diversity/parity in the competition, tests and tasks, and they should be flaunting it.

The brilliance of the Homestead/St. Petersburg back-to-back start was that it essentially flaunted two of the best tracks on the schedule on two of the most different types of tracks as the opening act. And starting this year we’ve lost it and if they go Road-Road to open in Brazil, I think it will continue this mistake.

Yes teams like it when similar setups can be used in consecutive weeks; however teams have always acknowledged the beginning of the season to be a showcase of the difference to be expected in the year. Waiting 3-4 races to find out who is good on ovals and what oval competition looks like is too long, especially when you figure there will be a break after the first 2 weeks of Brazil AND that Long Beach, St. Pete & likely Barber as an addition will be in their normal early Spring slots.

That is just TOO much road/street before Indy if only Kansas is there (and rumored possibility of Phoenix). If Brazil truly wants 2 races to be the opening act, one of them NEEDS to be an oval, no matter the size and banking. IndyCar needs to flaunt what they have, the only true racing series that tests ALL the skills of the drivers, not just turning left, and not just road/street.

-China on the other hand is one I’m not particularly open on, for the exact reasons Brazil make great sense (and the same reason Canada, Japan & Australia do/did).

We have no Chinese drivers, or history of Chinese drivers, or Chinese owners or Chinese manufacturers & parts, unless I’m totally missing something. We have tons of connectivity in Brazil, and tons of connectivity in Japan & Canada; but I’m not seeing China’s connection for fans. The one connection it does make and this might be the decider for the Series: money they are likely willing to pay.

Since the majority of travel cost is happening on the way to Japan as it is, China can piggyback and the league may likely be able to collect a very large sanctioning fee. Other than that, I don’t know of a Chinese fan base, or a good crossover time zone to make China work.

-India... ? Now take the large sanctioning fee China is likely willing to throw at the IRL away, and you have India. India makes no sense; absolutely no crossover with any technology, drivers, fans, and likely no money to go with it. But at the same time I don’t think the series is truly considering it.

In the end I see Brazil as a great idea, but wherever the IndyCar season starts it needs to start with Oval & Road courses back to back to flaunt the diversity; & going to Brazil, Canada, Japan flaunt (but don’t go overboard) with the worldly collectiveness the series has more than any other. I also worry about the series starting to head into an unbalanced schedule favoring road/street. Maybe adding the Rockingham oval could be a way to do both? I think 50/50 or 60/40 in way of ovals is where it should truly aspire to be to please all fans and truly do the one thing no other series does.

Crown a true world champion, tested in every way, show quick ovals, long endurance ovals, streets, natural roads & against drivers of every background.
Posted by Allen Wedge at 10:42 AM