Yeah, I just can't do it any longer. Between my job and my family, I just don't have the time that I'd like to commit. As much as it hurts to say it, I think I'm done. It's time to retire... from the NFL.

"The NFL??" you're thinking. "But Ron, don't you have to actually PLAY in the NFL before you retire?"

Well, that's what I thought too! But then agent Drew Rosenhaus announced today, via Twitter, that LB Dan Morgan has decided to retire. Again! 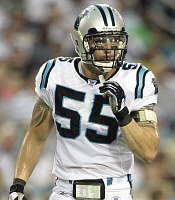 See, Morgan signed with the Saints last March, only to retire two months later. He had played in 4 games over the previous two seasons and had only played more than 12 games in a season once. At some point he told the Saints he wanted to play again but has apparently changed his mind again.

I've played as much NFL football as Dan Morgan over the last couple of years. And he's retired twice. So I figure it's time for me to quit as well. Consider me retired.