Notes from the IndyCar Series weekend at Richmond International Raceway

Well, I finally got out to my first track of 2009… wow has it really been since last July at Nashville that I visited a track!? Well Nashville as would have it, was just 1 month before I found out I was moving across the country; one move, one housing market crash, and many months later, I was finally settled and got myself to a track.

As luck would have it, fellow blog-writers Will McCarty & Chris Estrada were there too this weekend; good guys & great writers, check out their stuff if you haven’t already. Many good conversations were had, good pictures taken, and best of all, putting faces to names. Favorite quote of it all came from Will pondering about all us bloggers: “wasn’t there somebody who live-blogged the entire 24 Hours of Daytona?”

Heck yeah there was! Only the finest and craziest ideas from the folks here at FW, just wait till we announce the plans to push the envelope for Blogathon 2010!

But back to Richmond, which much resembled Texas 2009 in a lot of ways: both were at night, both had a lot of action and passing during practice, and both became parades during racetime. Many people have talked about the issue(s) & possible solutions; personally there was something at RIR things I didn’t see at Texas that tells me how bad, how dire, and how immediate of a problem this will be if it doesn’t get fixed.

While I spent Friday as a member of the media, attempting to follow the conversations of the 4 Japanese media members, I spent most of Saturday as a fan, entertaining some family & friends as guests at the race. Saturday was spent through the parking lots, front gate, pedestrian tunnel access and most importantly, with paid tickets and paid garage passes. Personally I felt embarrassed after all the excited convincing I did to get friends out there for an IndyCar Race. Lucky for me they all still had a good time regardless of the lack of track action, they were more in 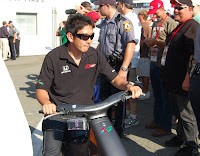 trigued to be attending their first race and enjoying the garage access.

They still had all had a very good time, including Mrs. Wedge who was also astonished by Tony Kanaan's current quest as a wingman, to help out his teammate; or as she put it: "Hideki is hot! How does he not have a girlfriend!?" 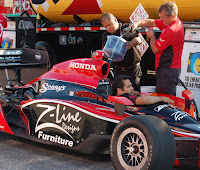 There was also a lot of amusement when seeing these great crews in action in the garage, and especially after learning of the IndyCar Series / Apex Brasil super secret funnel device for fueling the cars... yes, that is, in fact, a sawed off 5 gallon water jug top.


The same satisfaction can’t be said for the fans I saw leaving the track in very large numbers, with 100 laps to go! I would estimate that by the checkered flag that at least 30% of the fans had already left the track. That is NOT good.

Many drivers apologized to the fans, and did so on TV and over the PA system at the track in post-race interviews, and its great to know that they think there is an issue at hand. Surprisingly enough, Terrell Owens has not yet gone on record apologizing for it yet.

I attended the “unpassable” Nashville SuperSpeedway in 2008 and I saw MUCH more passing there than I did in Richmond. In fact the “problem” with Nashville was the track grip lending itself to act like a road course, with passes taking a few laps to setup and execute, and also loss of position if you failed to make your pass. But to say Nashville lacked passing is inaccurate, especially if you keep in mind the Indy Lights race with passing all over the place.

However, I think to say that ICS at RIR 2009 lacked any passing Saturday, it would be entirely accurate. If you remove the restarts and the 2-3 laps after each, there were absolutely 0 passes made on the track, and that is no exaggeration. No one could pass and it surely wasn’t by lack of effort, I must have watched Marco Andretti attempt the 2nd groove upwards of 50 times only to have it cause a giant wiggle and save; and the same happened to any other driver who tried, from Hideki Mutoh being unable to get past the slow Mario Moraes, to Dario being unable to take advantage of Mutoh’s failed passes and lost momentum, guys simply could not get alongside another car without losing their car.

Now I’m not going to harp on about this; we all know there’s something going on, but I will say that the USAC race before ICS had passing, some took time and setup, some happened easily, but there was passing. There was also plenty passing and action during the Indy Lights race at Nashville last year & Indy this year & Kansas this year. So we can rule out this being track issues.

So what has changed? To me it seems as simple as options being taken away. We have 1 engine, 1 chassis, 1 tire, 1 wheelbase, 1 wing angle, 1 sidepod shape and many other aspects that are mandated at certain shapes, lengths, & angles.

There is nothing wrong with formula and option regulation, but there is something wrong with too many mandated specifications. Grand Am is known as a very tight ruled series, yet teams still have over 4 chassis providers and engines to try from, and even after that, they can try many other options & modifications on the car…so how about the quick and easy ones:

1- Open up Mirror modification.
2- Inverse the pit selection
3- Go back to a wheelbase range, instead of one mandated length
4- Open up wing angles to a range instead of 1 mandated angle
5- Give teams the option to run the air-flap in front of the rear wheel or not, and modifications
6- Change the fuel knob to have only 3 settings: A) yellow, B) green full rich & C) green lean; and make sure there is a decent difference between the HP produced between B & C
7- Allow teams to experiment with exhaust exit angles/shapes

As far as pit selection goes; we know Brian Barnhart has said random selection can cause incidents; and he’s right but aren’t we all professionals here? Even if so, there is a simple solution to that. Inverse the entire field; 1st in points gets the last pit stall. It is simple, it keeps the same cars together as they are now and it could once and for all prove/disprove the 1st-pit stall assumption.

I know there are people out there who like to say that Target/Penske have faster pit times so the pit location theory is wrong, but what they fail to take into account is that a large reason for the fast pit times is short filling the fuel as a result of seeing other cars coming down the line, and then doing some fuel conservation to make up the difference; which happens quite often. If anyone is going to get a supposed advantage, let it be the teams at the bottom of the charts, who need that kind of help.

About the last one in the list, the biggest thing I noticed this weekend about the new exhaust, is how irregular it is to the aero-shape of the car. It protrudes nearly straight up (the pod, not the pipe), and there doesn’t seem to be a reason for it, maybe some guru can fill me in; but I don’t see the harm of letting teams experiment with the pipe angle and shape of the exit bump on the side pod.

What they should NOT do under any circumstance is go to a “push button power” system. That system has been tried in Champ Car & A1GP and it is not the solution. 95% of the time in those series the button is simply negated as “push to not be passed.”

And in the long term (and by that I mean between now and 2011) what needs to happen above all these; the IndyCar Series needs to openly publicize they are open to new chassis manufacturers. 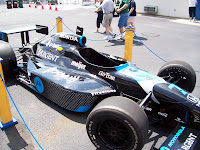 The IndyCar Series can’t make chassis manufacturers magically jump in the pool, but they can definitely do they exact same thing they did last year with engine manufacturers and call a chassis summit; and find out exactly what the chassis people are looking for as incentive and make it happen. Lola, Riley, Dallara, Panoz, & many more are active in numerous series, I can’t imagine much of a reason they wouldn’t be interested in the unified series with many, many teams to align with.

Whatever is going to be done about this all; it needs to be done NOW; not with a bunch of testing of seperate things over time to see which one works best, teams need more options, and they need them now; if fans aren't waiting more than 200 laps for competition to break out, they’re not going to wait around long with only subtle changes over time.
Posted by Allen Wedge at 8:50 PM

I would think a simple solution to the assignment of pit stalls would be to use the same procedure they use to determine qualification order on ovals - pick a number! If you unfortunately draw #1 for qualifying, the upside is that you get pit stall #1 for the race. This can all be done prior to the first practice session with the drivers or crew chiefs attending. Use the same procedure for road & street courses even though they qualify in groups rather than individually.