Tim Floyd - Will he coach again? 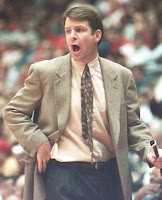 OK, if you've been following the FW closely (and I mean besides the racing stuff!) then you'll know I'm a Tim Floyd fan from back in his days at UNO. He led the Privateers to national rankings, NCAA and NIT tournaments, and 20-win seasons. I could usually get in the games for $5, if not free, and even got tickets from Floyd himself once. It was a fun time and I'll always admire him for what he was able to do in New Orleans.

All of that aside, though, you don't have to be a Floyd fan to admit that he is a good college basketball coach. He is not Coach K or Roy Williams, but he usually gets sufficient production from the talent he is given and rarely ends a season with disappointing results.

This is why I was pretty shocked while listening to PTI today. They were discussing Floyd's resignation from USC (who's gonna coach Lil' Romeo??) and Michael Wilbon said, "He's done." As in done coaching. He clarified this by saying Floyd would never coach division I basketball again.

I find this very hard to believe. First of all, we don't know if the allegations are even true. Yes, it's odd that a Mississippi paper broke this story and that he hadn't allerted coaches and players that he was resigning, leaving us to believe there are most certainly details that we do not have yet.

But let's assume that the allegations are 100% true. I don't know what the penalty would be, and I assume it would include some type of suspension for Floyd. But if that happens, when that suspension is over and if Tim Floyd wants to coach again, are you telling me that no D-I team would offer him a job? That is ludicrous.

Even if he were a terrible person, as an above average coach, he will have a job. Michael Vick will play in the NFL. If Barry Bonds and Sammy Sosa were 10 years younger, they would be on Major League teams. Surely Tim Floyd will coach D-I basketball again. If he wants to.

In the comments section, list a coach or player that has done something worse than paying $1,000 for a top recruit and was then given another chance.
Posted by Mike at 11:17 PM

Playing my own game!

you then of course the littany of things the curreny UCLA football coach Neuheisal (sp?) did and 2 previous jobs

Yeah, see. Knight choked Neil Reed. And I'm glad you mentioned him because this proves my point.

Reed was my absolute favorite high school player of all time. For two years I got to watch him get beat up by bigger guys, only to take the hit and make the shot, from anywhere on the court. I watched him play as much as I could, with my dad driving hours sometimes.

All he wanted was to play for Knight. As a McDonald's All-American and Gatorade Player of the Year, he could've gone anywhere, but of course chose Indiana.

And what does Knight do? He chokes him! (I'm sure you'll find video on youtube, but I'm running late.) I never once said Knight should be out of coaching.

[Now, "choking" = putting his hand around his throat to get his attention.)

He should get whatever the penalty is and then we move on. It was a really bad mistake, but we can't take away his ability to earn a living.

Besides... for whatever reason that I can't remember (his dad's friendship with a coach maybe??) the incident caused Reed to transfer his senior year... to USM, where I happened to be a senior as well! I had so much fun going to the games that year and will always feel fortunate that I got to see him play for an entire season.