We've talked many times in the past about both, our love of great paint schemes in racing, particularly Alex Lloyd/Sam Schmidt/Ganassi bright pink HER car for this year's Indy 500; and also talked about the recent lack of Indy Lights/Atlantics winners & contender's ability to move up into the top ranks.

While it is slow progress, it is still progress in seeing Raphael Matos in a ride full time and contending already; and then recently in this week we've seen Richard Antinucci announced for at least one race with Team 3G with publicly stated desire of both team and driver to work on something full time for the 2010 season. 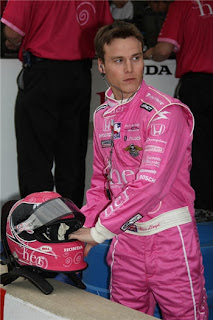 And while the last one isn't an announcement of any deal or progress; Alex Lloyd did announce via twitter today:

"So I have decided to leave Ganassi Racing. I need to explore my options and get into a race car and to do that I need to be a free agent. CGR have worked hard to find funding and I appreciate their efforts, I need to get back behind the wheel and this gives me my best chance."

While we can currently only hope this means he has something in the works for a IndyCar Series ride; we'll just have to wait and see.

The following is ALL speculation: What makes this move interesting is that a few sources have reported the rumor about Scott Dixon talking to Gil De Ferran for joining Gil's new team for 2010. IF that were actually happening, whether on good terms or bad for Dixon/CGR, you would imagine that Chip is already working on the replacement.

So this would make me think of a couple scenairos; 1) if Chip is actively searching for a replacement, its apparently not Alex & Alex is tired of waiting around for his contract to turn into an actual ride. 2) Again all speculation, but if this were the case, it would give credence to the other rumors out there that Chip is interested in/talking to either Justin Wilson, or bigger, Danica Patrick. Again all speculation, but I have a feeling that with Dixon, Patrick, Hunter-Reay and many other driver's heading into the end of contract years; we may already have the beginnings of a BIG silly season between 2009-2010.

Now if the CGR movement is not happening after all, we have still learned that Alex is done waiting around for his CGR ride. And while I've heard no talk about this at all, I'd love to see Sam Schmidt decide to move up to the big boys using the driver he now has plenty experience with.

Whatever happens, I don't know a person out there who doesn't want to see Alex Lloyd land a full time ride!
Posted by Allen Wedge at 9:59 AM

I'm with you on that. While I don't doubt they were working on something more for Lloyd, it was still disappointing that all he got were two Indys and a couple of Grand-Am events. I wish him well and hope he can find a good full-time ride.