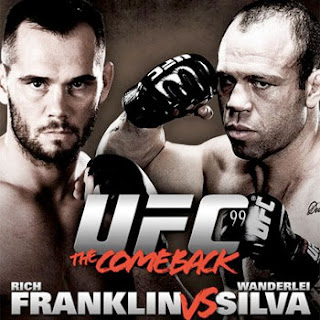 UFC 99: The Comeback takes place this Saturday, June 13th, in Cologne, Germany. Let's be honest here, we can pretty much call this PPV a "filler" event after last month's LHW championship bout between then title holder Rashad Evans and new champ, Lyota Machida, and next month's monumental card featuring Brock Lesnar, Frank Mir, Georges St. Pierre, Michael Bisping, and Dan Henderson. That being said, this PPV, despite having what some fans are calling a "weak main event" and no titles on the line, does have some intriguing match-ups.
UNDERCARD

This fight will mark the return of Cro Cop after a nearly two year absence from the Octagon. Cro Cop was once one of the most acclaimed heavyweights in the world but suffered devastating back to back losses to Gabriel Gonzaga and Cheick Kongo following his debut win in the UFC. After his two losses many speculated if Filipovic would continue fighting. He seemed disinterested in the sport and unmotivated but he has been given a rare opportunity; a one-fight contract from UFC president Dana White. Cro Cop has claimed that he's focused, motivated, and has been training hard, even adding a few pounds to his frame for his bout with Al Turk. I'm hoping that the Croatian Parliament member returns to form with an impressive win and reclaims his status as one of the top heavyweights in MMA.

After leaving the UFC in 2003. Uno has been fighting for K-1 and DREAM. He's 3-3 in his last six fights dating back to 2006 and will be looking to start a new winning streak. Uno, a grappler, will be taking on a pure fighter when he faces Spencer Fisher. I don't know enough about Uno to break down this fight but I'm blindly predicting a win for Fisher.

Davis is 8-1 in his last night fights with the only loss coming to fellow UFC 99 competitor Mike Swick. Both fighters are quick and have wins via KO so this could be an exciting bout. I'm looking for Davis to finish Hardy and take the win.

Mike Swick is one of the most entertaining, explosive fighters in the welterweight division. He's 8-1 in the UFC and has a knack for finishing fights very quickly. Another win or two and he should be fighting for the welterweight title. I'm a fan of Swick and hope to see him continue his rise towards the top of this division.

Velasquez has looked like one to watch in the UFC heavyweight division. He's been impressive in his last few wins and looks like he may have what it takes to establish himself as one of the better heavyweights in the UFC. He's still fairly young (26 years old) and will face a veteran Cheick Kongo who's battled some big named veterans such as Mirko Cro Cop (win via unanimous decision) and Heath Herring (loss via split decision). Kongo can end a fight with one strike, whether it be his hands or feet, but Velasquez is well rounded and has the skills to outlast Kongo. I don't know if Kongo can ever reach and maintain the level of Mir, Nogeira, or Couture, but I think Velasquez can and will. I'm pick Velasquez to win this fight and continue his undefeated streak.

Both of these fighters are at a bit of a crossroads in their respective careers. After 2 greuling attempts to knock off middleweight champ, Anderson Silva, Franklin has decided to make the move to light heavyweight (205 pounds). Silva is 1-3 in his last 4 fights in the UFC and is thought to be on the decline of what has been a very impressive career in MMA, dating back to his wars in PRIDE. This match takes place at a catch weight of 195 lbs as Franklin is on his way up to light heavyweight and Silva may very well be on his way down to middleweight (185 pounds). Silva, as always, will look to finish this fight viciously, while Franklin will likely play the safer game and get ahead on the judges scorecards while avoiding as much of Silva's strikes as possible. I expect Franklin to win this fight but will not be dissapointed at all if Silva shows us a glimpse of his former self.
Posted by Furious Deuce at 4:01 PM