What more could I want?

Wedge, you can bet that I won't miss tonight's CWS game 2 featuring the LSU Tigers and the Texas Longhorns.

That game last night was incredible. There were great performances from both teams and some really clutch moments by LSU. LSU left fielder, Ryan Schmipf, started out the first inning much like most of his other CWS at bats, by completely ripping the cover off the ball. The rest of his at bats were a different story, however, as the strikeouts began to add up. ESPN consistently showed the impressive hitting stats of the Tigers 3-5 hole hitters but last night was a bit different. Besides Mikie Mahtook, who came through with a desperate poke single to right field and later the eventual game winning hit, LSU got big hit after big hit from some different faces, mainly in DJ LeMaiheu and Jared Mitchell. I don't know if it'll be possible to capture the same drama and entertainment in tonight's game 2, but I sure won't be dissapointed if it even comes close. 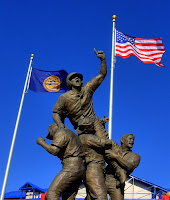 I agree with you on your assesment of the CWS as compared to March Madness. March Madness is a huge draw and gets tons more national recognition because it has become an phenomenon in and of itself, in large part thanks to gambling and the filling out of brackets. Even those who do not follow or appreciate basketball get into the tournament because of the brackets. This is not to say that March Madness doesn't provide their fair share of drama and heroics but to me, it doesn't compare to the aura and stories of the College World Series. Let me also add that I'm fully aware that if you're not a basebally fan, it's extremely difficult to watch, much more so than non-basketball fans watching a basketball game. But being a baseball fan, you're dead on when you state that there is a "Field of Dreams" blanket wrapped around Rosenblatt Stadium.

You rhetorically asked "what more could you want from NCAA baseball?" Well, I'd like a little more of the same and even moreso, another LSU win.
Posted by Furious Deuce at 11:02 AM

Unfortunately, it won't be Rosenblatt much longer; I understand needing a new stadium, but pardon the big baseball fan in me that really doesn't wanna see TD Ameritrade Park.