What More Could You Want From NCAA Baseball?

I've harped many times in the past, and will continue to say that the NCAA Baseball Tournament is the best in all of collegiate sports; much much better than the highly regarded March Madness which rarely delivers the kind of excitement and unexpectedness of the baseball tournament & College World Series.

First you've got underdogs actually winning multiple games consistently (not since 2003 has a top seed won it all); of course you have the Field of Dreams-esque feeling of Omaha always as the goal; but even this season where we are ending the tournament with the #1 and #3 seed; it still delivers.

3 non-top seed made it to the final 8 (Omaha) and one of them did it by being the away-underdog in every game it played (Southern Miss); about 80% of the games played have come down to the final innings; Texas themselves has thrice needed the final inning to come back and win and once took a game to a record 25 innings with Boston College. But all that aside for what fans saw last night: 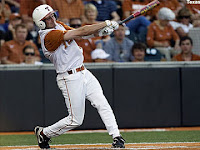 -Texas starting pitcher Chance Ruffin struck out 10 allowing only 5 hits
-Longhorn batters hit 5 home runs!
-Texas also scored a run on a wild pitch
-Texas was 11-0 in games where they had multiple home runs
-and they were 39-0 in games when they had the lead going into the 9th inning...

...and yet, somehow they lost last night.

or better yet, LSU found a way to stay in the game all night with 2 home-runs, clutch hitting, base running and solid pitching & fielding. LSU most crazily went down to their final out before a 2-out/2-run double by D.J. LeMahieu to tie the game and solid pitching to take it into extra innings with a 7-6 win. We saw LSU's amazing right fielder Jared Mitchell hit possible the fastest triple I've ever seen sliding into 3rd base nearly 1.7 seconds after hitting the ball (ok I'm making that up, but that is what it felt like).

Any baseball fan would assume LSU has a stranglehold on the championship as Texas worked through a good 5 pitchers last night; but if NCAA baseball's tournament has taught us anything; it is to sit, watch and enjoy & wait until its all over.

I personally think LSU should have the upper hand now, but don't forget in 2008 the Georgia Bullgos, not only won the first game, but were ahead very late in the second game of the championship last year, and yet, Fesno State are our 2008 Champions.

Whatever happens, I don't think I'd miss it if I were you.


Pictures via Getty Images
Posted by Allen Wedge at 10:11 AM